So many Global Issues – how can one person respond to them all?

Whether we like it or not, we are all being called on to bring visibility to how we act, and, through those actions, to the systems we are promoting.  When on a highway to destruction, it’s a good idea to step off it… but it’s not so easy.  Where to go instead?  The factors involved seem so diverse and complex.

Finding a way through requires a highly under-rated and increasingly essential life skill that is taught very rarely, a skill you might call Pioneering.

Rather than just an action, pioneering is an attitude of stepping off the marked path, of allowing things to unfold, instead of seeking to control.  Without a bit of pioneering energy, I am at great risk of following Paths of Least Resistance.  Family, school, and local, regional and national culture all have good things to offer, and have their own code, rules and a “common sense”.  These can keep me out of bad trouble (one of the prime benefits of marked paths).  But if the standard paths are followed unquestioningly, they might keep me away from good trouble.  Worse, I may never form a set of rules of my own.  Worse still, if I simply follow others, I might join millions in causing thoughtless devastation.

I have definitely benefitted from giving pioneering a go.  On leaving 15 years of immersion in the culture of the financial services industry, tool such as logic, prediction and expectation could only have taken me so far.  If I had aimed myself at things I could imagine, or that felt familiar, I wouldn’t have discovered anything new at all – the answers I needed were not contained in the world I knew.  A fresh idea of living required a large dose of uncertainty and a visit to the unknown.  Alternatives arose from genuine exploration.  Pioneering carries the power of possibility. 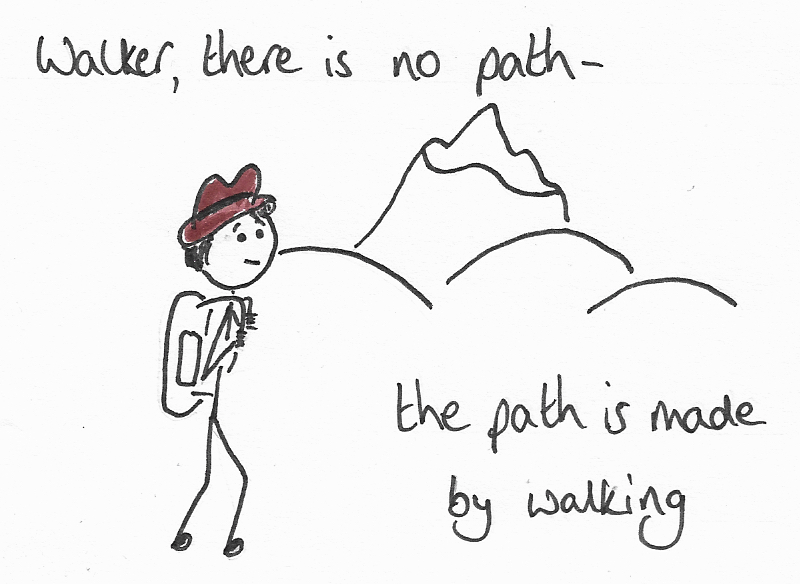 In a similar way, the knot of big ‘external’ issues we face cannot be addressed through means that feel normal and comfortable.

Paths of least resistance can decide for me how I eat, travel, or treat women or black people, so I had better be careful if my culture is struggling with issues like species extinction, pollution, sexism and racism (oh, and climate change); I can feed all these things completely unknowingly if I don’t look up, or decide my own path.

But if I do, the alternative options multiply rapidly and I struggle less with these issues.  If lots of people consciously turn away from the worn ruts (e.g. around meat consumption and who does the housework) and not accept the legacy handed down to them, then attention is inevitably drawn to what those ruts really are.  They cease to be invisible, begin to be questioned and their hurtfulness seen and felt.

The big issues of our time are not isolated matters; that is how they flourish so well together in the cracked ruts of our culture.  Sometimes it feels like there are too many things to worry about, as if climate change and sexism are different problems I need to ‘work on’ separately, along with a thousand others.

But at no time did I ever consciously focus on being racist or wiping out insect populations.  Similarly, I don’t need to knock off each ‘issue’ individually to change them.  One mindset feeds them all (invisibly), so in the same way one mindset changes them all: step off the path, bring visibility to what is, and to what else might be.

This important process requires plenty of reserves of pioneering energy, and these reserves only grow with practice. I find that in order to understand the wisdom and utility of the pioneer, it’s best to practice it literally – out in nature – and then usefully integrate it elsewhere in life as a concept. 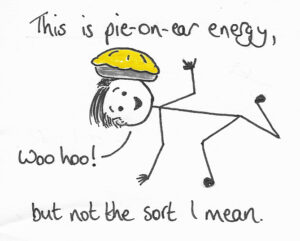 On the Odyssey course for 16-19 year-old men, we seek to drink in the wisdom of pioneering as deeply as we can.  On one occasion, we spend five days off-grid, choosing our route as we go and spending 60 hours on the Hunter Gatherer Challenge, living only off what we can forage or catch.

A real feeling of power and competence can come from this, and a realisation that there is more on offer than there might appear to be, if we can get past the familiar habits of supermarkets and campsites.  Away from artificial environments, real connections can quickly form.

From there (or any other authentic and accessible starting point), it is easier to begin breaking open other cultural attitudes and habits I might have inadvertently adopted.  I can’t rationalise my way out of racism – I somehow have to find it within myself to extend my love to people who look different to me.  I need real connections, new stories.

We need to discover how to love more.  The Pioneer needs to step up more than ever before.  For the younger generation especially, where is the experience of that crucial pioneering energy going to be found?

In 2020 you’ll find me running a number of programmes and events; click the links for further details: