Little consolation from the console

I have spent a lot of time in the outdoors with adults and kids, often with teenage lads on a string of 3-day outings together, in undomesticated environments like woods, moors and rivers.  One lad recently pointed out to me that, out of the last 18 months, cumulatively he had spent an entire month with me, on ten different adventures.  As well as having consistent contact over the seasons with them, I have it with their parents too.  Several patterns or threads have shown up, and I’m going to chew on a few of them over a handful of blog posts.

Here is the first and most obvious theme:

“My son used to get muddy outside all the time, but now he’s a teenager he’s stuck to a screen!” 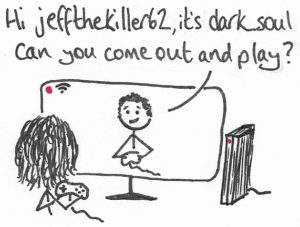 In a rather sad eureka moment, I recently made this association:

Ouch.  If there is a clue here, what might a large number of young people be sad about losing?

Here’s a suggestion: real connections, a sense of belonging, and places where they can genuinely experience this.

Kids frolicking outside with gay abandon is a heartwarming image, but as soon as they approach an adult-sized length, this seems to be seen as frivolous behaviour… and this attitude continues from 12 until death.  Play is seen as trivial, and everything becomes so serious.  School hours lengthen, homework piles up and gets more and more abstract and quantitative. As soon as a youngster, or parent, family, school loses a relationship with the outdoors, it can seem hostile rather than inviting; adventurous behaviour threatens comfort and safety too much and might challenge a carefully cultivated (and therefore fragile) identity. And besides, the payoff isn’t at all obvious.

Along with this, in the teenage years there seem to be two big dynamics (which are often in awkward competition with each other): of seeking what authentic feels like, and needing a feeling of fitting in to a group.  In the earlier half of the teen years, fitting in can take precedence over being authentic (which is fine… unless it still happens as an adult).  And there is no easier or absorbing way to feel part of a group than the way social media offers it.

It doesn’t seem to work though.  The weak medicine can morph into a worse disease.  Last year I sat round a fire at night in the middle of nowhere with a group of lads who began to express their immense relief at the lack of mobile reception, which released them from the requirement to maintain their exhausting and tedious social media vigil.  That’s when I learned about the misery of Snapchat Streaks.  Some did admit to missing their PS4s, but at least later while they lay in a hammock next to a gushing river at the top of a deep valley, they were able to contemplate that curious urge rather than act on it.

One mother described her son as having rediscovered his “internal fire” after some immersive experiences in nature.  It seems to me that this fire is doused by consoles (and weed and pornography).  Perhaps these avenues are merely outlets rather than channels – where energy gets vented rather than harnessed, resulting in emptiness and confusion.

Youth energy is a powerful force, and it’s going to go somewhere.  As I see it, at the heart of this fountain of energy is a yearning for adventure, to discover one’s own powers and in this way be able to authentically connect and belong.  That’s a long, challenging and exciting road – as any ancient myth describes.  But, as seems to be the way in our innovative culture, there are easy options available. You can pretend to engage in risk via video games, or pretend to engage in intimacy through porn. Take short cuts, get cut short.  These routes are, at best, false and ineffective and don’t deliver what is truly yearned for – a bit like dating a metal girlfriend.

Limited access to nourishing settings, and unsupportive attitudes towards experiences that are non-linear and mysterious, will push many towards the false friends of screens and other energy vents.

But a fire, once kindled, is a remarkably resilient thing.

Courting risk in wholesome environments that provoke deep encounters and authentic experiences alongside other fellow adventurers. That gets my vote, and that’s where you’ll find me.  I am interested in kindling fires.

In 2019 you’ll find me running two adventurous programmes for teenagers aged 13-16, one out of Sussex and one out of Devon.  Bookings are open.  They are both called Wolf Pack and they share common threads: