Charity from out of my closet

Decluttering has never felt so good.  It really came into fashion in the last few years – getting rid of all that junk you accumulated and heading towards a life of simplicity.

Something always felt missing in that decluttering fad though.  It can often be temporary and superficial, and not underpinned by deep value shifts driving healthier, more sustainable behaviour.

Well, decluttering has now been supercharged – you can get rid of your crap by loading it in your car and driving it off to Calais.  You get a double dose of feelgood, plus the national service of boosting Britain back up the rankings of Countries Who Care.

I am not saying that the tide of efforts to help refugees in Calais is wrong in itself, or that it comes from a bad place, not at all.  But there should be no congratulation handed out when we go back to our everyday lives.

Our everyday lives are what caused it to happen.  We carry a chunk of the responsibility.  To ignore these events would be like driving on after knocking someone over; at least many are stopping to attend to the victim.  Can we ever accept this responsibility, or is goodhearted decluttering the furthest we are prepared to take it; just attend to the roadkill on our immediate doorstep while the SUV keeps squishing along its path? 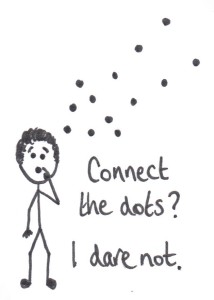 Anyone who lives a western lifestyle is contributing to climate change which is increasingly understood to cause conflict in vulnerable, unstable areas.  Normally this is far enough from our island to ignore, but dead babies on Mediterranean beaches make that strategy less and less easy to adhere to.  I imagine most people hope that the crisis will pass, the refugees will find a happy place (not in my village though) or at least the newspapers will reduce coverage as Strictly Come Dancing resumes, and we can get back to normal, filling our cupboards again and jumping on planes.

Anyone who lives in a western state is involved in selling huge amounts of arms to vulnerable, unstable areas.  Some of these refugees will be running from weapons manufactured in this country in a lucrative arms contract that really boosted our economy and brought us back from the brink of having to have one less holiday this year.

We vote in governments with mandates to defend and advance our way of life.  Our way of life kills people.  We don’t want that to happen but we also are not prepared to change.  It is very difficult, and certainly inconvenient, to address an issue at that depth.  It makes me feel powerless.  I feel much more in control when I go the charity route, and attack symptoms rather than underlying causes.

This is perhaps our own parallel crisis playing out, alongside other people’s, like the Syrian refugees’.  Surely in our hearts many are beginning to understand the connection we have with these suffering people, and notice how we are suffering too.  The slow realisation that our cherished culture directly kills people is a tough one to swallow and will rightly, and necessarily, cause deep personal moral crisis if truly confronted; another crisis that won’t disappear overnight. 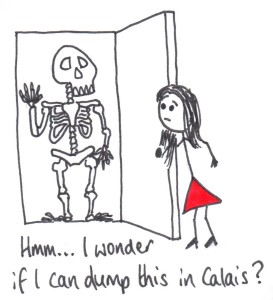 Charities do lots of work that saves lives, as well as make thousands of charity workers’ lives feel more meaningful.  But it can also act as a salve, that makes it all feel OK, helps us still feel like good people when bad things happen.

But it is not OK.  There is no sign that we will vote in a government that ideologically opposes the arms industry, or that we will change our behaviour that causes climate change (amongst many other things).  There is every sign that climate change has already gone past the point where massive global unrest and chaos can be averted.  But there is no sign that westerners like me will go beyond anything other than giving away our spare blankets with heartfelt condolences.

We can empty out our closets of our clutter, but the skeletons remain.

One comment on “Charity from out of my closet”