England might get together and look down on France in the 6 Nations rugby.  But Northerners in England rarely associate with lightweight southerners.  But up north, Yorkshire and Lancashire have a long history of rivalry.  West of the Pennines, Manchester might have a low opinion of Liverpool, but that’s nothing compared to what bubbles up when Man Utd and Man City meet.  Altringham might look in disgust at Moss Side, but Park Road residents will often think the rest of Altringham is a bit common.  Although Mrs Jones in number 5 thinks Mrs Smith next door is a bit ill-bred for Park Road.

Drawing boundaries is often abstract, and also seems to create difference and tension.  But the thickest, most guarded boundaries tend to be the ones around nations.  I wonder whether the concept of Nation has had its time and needs to take a back seat for the sake of a functioning future.

Aside from their role as culture containers and identity providers, nations are administrative units for management of people and resources.  And it really doesn’t look like they are very good ones any more.  They seem to get in the way of vital change, which leads me to question the legitimacy of the unit, its leaders and its apparatus.

There’s a lot of worrying stuff in the world today (need I even bother naming a handful?) that requires urgent attention.  If anything meaningful is going to be achieved, the vast majority of this attention needs to addressed either at the community level, or at a global level.  Or in most cases, both.  At either end, nations tend to do more damage than good. 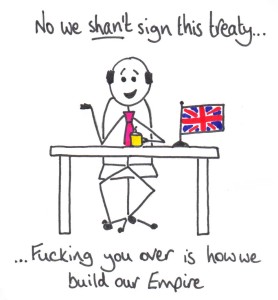 Nations, with slick administrators representing them, pursue the (somehow) morally acceptable “national interest” – abstract competitive dynamics similar to England vs. France in the rugby – which causes great harm.  Identifying with a nation creates a highly fragmented view of the world, and a distortion and limitation of responsibility: it stops at this border here, the rest is their responsibility.  So often, care for others seems to be eradicated in the pursuit of self / national interest (for example, the UK’s accelerating emissions from its economic expansion which will lead to many deaths in the southern hemisphere… but that is their problem).

And whose interest is the national interest exactly?  I’ll leave the capable Russell Brand to lead that debate, but it’s another wobbly leg of my diminishing patriotism.

Nations are usually BIG.  60 million people.  Communities don’t seem to work when they get too big.  They aren’t communities any more.  I even noticed this happen when an office I worked in grew above 10 people. Things get very complex and unmanageable, it turns into an organisation and human-ness evaporated.  Trying to treat a nation like a community just invites confusion; they have different ends.  So what seems to happen instead is a common identity gets manufactured, a British Brand, and promoted to a bunch of people who have little more in common than that their skin colour used to be the same 100 years ago, or that they live on the same island.  Easier to control and administrate, I guess.

Worst of all, the bigger a community gets, the more damage it can do. A village community is limited in what havoc it can wreak.  Forest Row lacks the resources (and desire) to develop drone bombers.  A nation adopting a monoculture and directing its resources towards its political and economic interests causes catastrophe.  500 violent civilian deaths in Iraq so far this month.

Nature usually provides working examples of how to design things that don’t blow up (apart from volcanoes of course).  Nations don’t feature in nature.  Diversity does.  In a mature rainforest, you can find yourself in a different ecosystem within 10 minutes of walking.  It is almost pointless to give the Amazon Rainforest one name as if it’s a single area that can be designated.

The alternative to nations is not articulated or agreed on yet.  But for me, a good first move is to withdraw as much support as possible from my nation and its agenda, and pour it into my community.  With the aid of the internet, empowered self-reliant communities can cater for gaps in resource or skill, and can find effective ways to collaborate around global issues to address the hideous global damage that nations have achieved to date.  And the rest of the time could be spent putting right the hideous local damage that has happened, restoring a better state of being – where humans have a true sense of belonging, and lives influenced by other people who actually care.