Born into a life of crime

Beyond the narrow definitions of the legal system, what makes a criminal, in reality?  And might many good criminals have no choice from the start?

There is a reasonably widely-held concern that Western civilisation is based on well-meaning people blindly inflicting increasing amounts of death on vital, precious living systems.  If properly confronted and explored it is a tough one to swallow, although once the thin veil is pulled back it can look worryingly obvious.

For example.  Coca-Cola is bad for us.  We know this.  The sugar is terrible for our health; obesity and diabetes are huge problems now.  The manufacturing process is extractive and energy-intensive.  It gets driven many miles and stored in refrigerators which is also energy-intensive and polluting.  And it produces tonnes of toxic landfill.  All this to have fizzy drinks.  Coca-Cola might sometimes worthily partner up with and fund Greenpeace, the WWF and the Human Rights Campaign to find ways to reduce the damage its consumption causes, but the root of the problem with Coca-Cola is simply that it exists (not something that the company is likely to address). 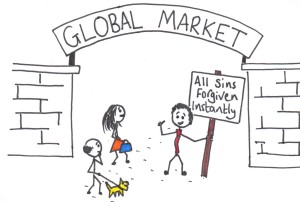 There’s the other side of it of course, that the enterprise provides jobs and economic growth and pleasure and some of its profits can be used for nice CSR stuff.  This is the ideology of market economics that makes everything OK, allows us to puff away the bad stuff.  But like Coca-Cola, the problem with market economics – at this stage now in our history – is that it exists.

So where does that leave me?  I already know I could never work for Coca-Cola, or P&G, or anyone like that.  But I also couldn’t set up my own little company to sell ‘nice’ fizzy drinks or nice soap, because another problem lies in the need to convert ancient resources into momentary and pointless fizzy drinks and soap, when (addictions aside) I simply don’t; certainly not as much as I need biodiversity and a functioning atmosphere.  It strikes me that we can’t have one and have the other as well.

I would like Coca-Cola to stop selling Coca-Cola.  The whole idea is fucking insane.  Many would disagree with me on that, which is fine.  Equally, I would like drug dealers to stop selling drugs, as cocaine seems a really bad idea.  Perhaps more people would agree with me on that one; drug dealers probably would not.  From the perspective of my own values, which increasingly seem to differ from the values of my civilisation, dealing in Coca-Cola or cocaine seem equally disturbing (which is funny actually, since they have a bit of a shared history). 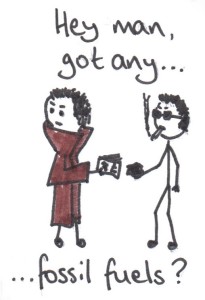 But what was even more disturbing was when I started seeing more and more in common with me and a drug dealer.  I was not born wanting to collude in pollution, inequality and species extinction, but I seem to have no choice but to participate in a crazed cycle of producing and consuming things, which causes just that.

I don’t imagine any drug dealer on a council estate was born wanting to sell drugs.  But with the opportunities available in the violent environment they grew up in, perhaps many had little choice… and grew to see it as the best option available anyway.  We both need to make money to survive, and that process hurts living things in different ways – the drug dealer’s way is more direct and obvious, and is considered illegal, while mine is several steps removed (but still pretty obvious really), and is currently actively encouraged.

Anyone with eyes or ears is aware of the plight of the rainforests and the oran-utans, and the rise of soil erosion and rape, even though we might not like to talk about it.  It is so easy to plead powerlessness or hypocrisy and escape into the legalised haven of consumerism.  After all, where else is there to go; an established alternative does not yet exist.

So first I let the despair wash through; this seems quite a normal emotion, something important to allow to come and then go.  Then comes the hope and excitement – an adventure into a vastly more enriching way of living.  No endeavour is quite so daunting once it’s actually been started.  And the more people who consider their own involvement in big problems, and question the system at its roots, and who subsequently form and honour their own values, the more an alternative begins to emerge to replace this broken one.

Whoever’s out there already, and I’ve met a decent bunch of you – I’M WITH YOU!!