No matter how interesting I found any job I’ve had in the past (or in most cases how exciting I have tried to make them sound to myself), there are always things I know I would rather be doing.  Often this fact revealed itself to me through my living for the weekend or waiting for holidays.  So why did I choose to spend the majority of my time doing that job?

And no matter how much I liked any colleagues in the past (mostly in the pub after work – during the day I found we mostly behaved like robots), there were always people whose company I enjoyed more.  So why did I choose spend the majority of my time with work colleagues?

Even though I used to be so busy with work that I had little idea of what I really would have preferred to be doing (and the people I might have wanted to be with were similarly absent), these still seem like insane choices.

The main reason I used to give myself for making these weird decisions and drastic sacrifices was Money: I have to do it, because I have to earn money.  This is a universal view which sounds so irritatingly and convincingly true that it seems pointless to argue against it.  I must work in order to live.  But what if it’s all a terrible misunderstanding? 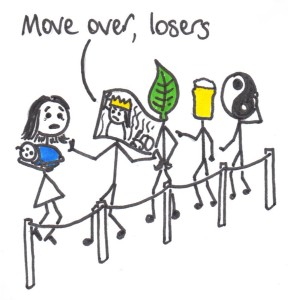 Money is often the bully in the lunch queue.  Money does need to be in the queue, but it always seems to muscle its way right to the front, in a familiar case of the urgent smothering the important.  Money does need to have its turn, but why does it always have to be the first thing I have to attend to all the time?  Surely its purpose is just to facilitate the things further in front, not steal the show?  I would rather its turn be as short as possible, before it goes to the back again, so I have time for the vastly more important non-earning matter of living.

But the act of living often seems to induce guilt.  It is an affront to busyness.  Living might be things like quietly enjoying my breakfast on a Tuesday morning, taking a walk because I feel like it, being in the presence of my family a lot without really doing much, sitting on a chair in the garden listening to the birds, or hanging out the washing.

I watched a cat in a field yesterday.  It was just watching butterflies.  And the butterflies were just fluttering.  Both had the right idea, and by joining in, so did I.  None of us were being lazy, we were just doing what cats and butterflies, and (occasionally) humans do, which also includes breathing and going to the toilet.

Why the guilt of “I ought to be doing something”?  It’s like the ordinary, unproductive things that living consists of are not enough, and some existential threat takes over – all that ‘What am I here for, Am I making a difference’  bollocks.  That deep fear of being meaningless that drives me to try and look clever or get famous.  The irony for me is that the contentment my soul yearns for lies in what the cat is doing, not the busy person marketing hair-removing cream.

A piece of wisdom that I see cropping up regularly in ancient and modern sources is that when we try to solve the problems of the world, we only add to them.  The real work – which perhaps requires an entire life’s journey – is to manage to teach myself that living is enough.  Vital importance lies inside something I often observe being put down as shameful selfishness.

For a human being in 2014, living will need to involve paid work sometimes; the amount depends on my spending decisions, and also on my tolerance for being bullied.

5 comments on “Guilty about living”