My wife walked in the front door the other day, or rather sprang in like a lynx, and proclaimed how happy she felt.  This was quickly followed by a dose of guilt about feeling that happy.  This, as I understand it, is not the first time in history that this has happened to someone.

It is true that an outbreak of happiness will inevitably be followed at some point by some unhappiness, as the two require each other to exist.  It seems to me that it is important not to pollute either of them, spoiling an experience of happiness by fixating on future unhappiness, or cutting short a good dose of grief with some old-fashioned pulling-yourself-together.  Instead, just experiencing them as they arise and depart.

A 3 year-old girl last week was a good example to me of this.  She was happy, and wanted to be chased and picked up.  So I did, picked her up, turned her upside down and ran a bit more.  She giggled hysterically for 5 seconds and then started to cry.  I put her down and she cried for 5 more seconds, and then set off again happily through the field.

That sort of behaviour often gets depicted as fickle or schizophrenic, even with young children – but actually it is just truth and freedom in action.  Feelings come and go… I remember how I feel moments before eating the Krispy Kreme and moments after: very different – awesomeness and awfulness in quick succession.  But it is not fickle or schizophrenic, it’s just the truth about feelings. 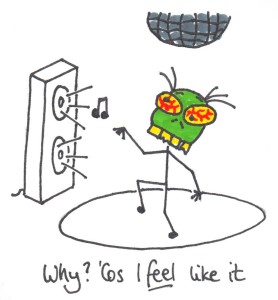 Maybe it’s that way because in those moments I am at my most animal, my most human – most embodying my feelings and emotions, when my mind is safely in its box and my body in control of proceedings, my brain limited to its proper role of helping me move and breathe.  These moments of climax – of happiness but also, I have increasingly noticed, of grief – are sublime.  They make life lively; they dezombify.

Intellectual experiences do not compare to creative, intuitive, emotional moments.  One big difference is that creative, climactic moments simply do not, can not, last.  That is the secret of their beauty. 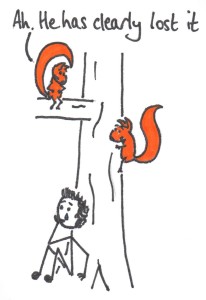 They are transient and fleeting, while intellectual bubbles can be resided in for prolonged periods, often at the expense of emotion and real human experience.  Maybe that’s why there is such a fixation on sex, as it has become one of the last places where modern intellectual man can go to experience the chaotic sublime (or, perhaps, a convincing substitute for it).

The tragic twist is that, in truth, the sublime is everywhere, especially in the ordinary.  But the emotions in which the sublime resides have so often been wallpapered over by sensibleness and rationalisation.

These days, if a tree were to move a man to tears he would be considered insane and unmanly rather than alive and free.  That’s probably why I have chosen to live next to an unpopulated forest.