Sleeping in the forest and saving the world

Do I view the world as a safe or dangerous place?  As I was coming home from sleeping in the forest the other day, I realised this might be a rather important thing.

Last year, before I started doing it, the idea of spending a night alone in the woods seemed scary.  But after giving it a try, I was surprised at how at home I felt; I felt part of it rather than an impostor.  The only monsters were in my imagination, and the only man with an axe was me.  Before long, my attitude shifted to seeing the woods, and inevitably by extension my world, as a safe place. 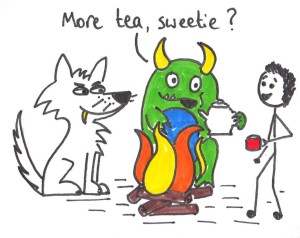 The opposite can easily be the case, however.  Watching the news can fill me with negative images.  Watching nature programmes can present a twisted Darwinian picture of the natural world as a cut-throat competition, driven by the Selfish Gene.  And working in an office can reaffirm this too, in a human environment.  Everyone is out to take what’s yours, because that’s business, that’s nature.  Plenty of people seem to enjoy all that, but I have found that seeing the world as dangerous and competitive has crippling implications, especially on my human-ness.

It seems to me that an anxious outlook is often the result of a lack of independent thinking, from swallowing messages from other people (this is of course not true for those living in objectively dangerous environments).  I can be made to believe anything if I am sat in my swivel chair not thinking for myself.  By outsourcing my opinions to the mainstream – newspapers and politicians and experts – I open myself up to manipulation.  There are entire industries that have evolved to feed this the mainstream point of view (or “common sense”, as these industries prefer to call it), and steer me to their solutions.  Easily achieved through the simple mistake of me wasting my attention on them.

If I think my environment is dangerous, I will probably be deterred from taking any risks, which keeps me obediently on the straight and narrow of the mainstream.  This serves the interests of the mainstream very well… but not mine I think.

In this situation, one big risk I will probably not take is to allow myself to trust, and to be honest.  Cultivating, through my own direct experience, a view of the world as a safe place, a complex system that I am part of rather than up against, encourages me to take the risk of, say, trusting other people with my honest feelings.  And trusting myself with them more to the point.  I might also trust my intuition and, just possibly, I might let my own creativity out of the bag.

Perhaps taking this risk of becoming properly human could be the most powerful and healing act I might be capable of doing for the world, to actually make it a little bit more of a safe place.

A person’s worldview will always be wildly wrong, and only a creation of the imagination to grasp the ungraspable.  But since I can’t help having one, I’d rather do the things that nurture growth and sanity.  It’s funny how something so major can be sparked off by something as simple as switching off the telly and sleeping in the woods.  Or at least just switching of the telly.