I have been reading a lot of fairy tales in the last year.  Their authors are typically rural country folk, and therefore usually feature a poor person’s image of rich people.  Kings and princes are often mean and have rooms full of treasure and spend all day hunting.  And they are sick or stupid and easily outwitted by everyday heroes.  These stories laugh at and ridicule the powerful. 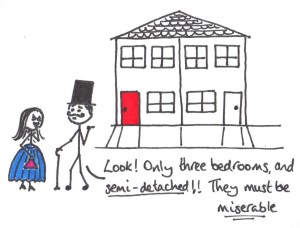 Maslow’s hierarchy of needs is a popularised bit of science.  Food and shelter are critical, that’s easily understood.  When my hammock gets blown to bits by a rainstorm, I understand how easily some of those things are taken for granted.  Rich people often characterise poor people as missing out on the things higher up on the scale (even though I’m not convinced anyone truly knows what “self-actualisation” actually means).  But pretty early on the hierarchy is the human need for ‘love and belonging’.  To me it seems that this human need, in its truest and purest form, is rather lacking in fast-paced modern societies, whereas in some “poor” societies (by no means all of course), they might not have money but they have something undeniably more enriching. 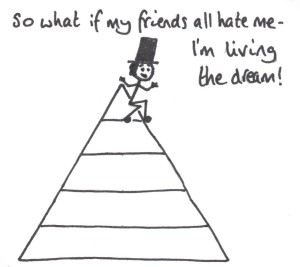 Maslow’s hierarchy is not a social hierarchy, but it can often be taken as such.  Emotional poverty ignores social standing.  A bit of survival wisdom says that without shelter, water and then food, you’ll last 2 hours, 2 days and 2 weeks, in that order.  A lack of love and belonging isn’t so fast acting, so it can be easily ignored, but in the end can be utterly crippling, whether its victim is driving an Audi or walking 10 miles to fetch water.

Poverty isn’t just about money.  Money can always help it along, as it can often be used to create gain based on someone else’s loss.  Or it can substitute more precious things: I look around and I see extreme poverty, in love and belonging, in our culture.  It has been replaced by consumerism – a frail substitute.  I see a clear thread running between an emotional poverty in the “rich” world, and the behaviour that stems from this, and other forms of poverty in the “poor” world.

What if there is a way of enriching myself, that is not at the expense of someone else, but actually serves to collectively, un-measurably, but very meaningfully benefit the situation of people I’ll never meet?

I’m pretty clear about which poverty it is that I first need to be addressing.