I watch birds frolic in the garden.  I dread to think how many hours I have spent doing this.  They might have inadvertently told me a few things though.

Sparrows.  They look like nervous little fellows, constantly darting their heads around and flying in and out again.  This must be because something’s always trying to steal their eggs or swoop out of the sky and gobble them whole, I used to tell myself.  This is what I heard at school and get told on nature programs, after all.  It’s tough being a bird, or any animal.  Brutal and violent and scary.  At least from the perspective of a human who is watching from a centrally-heated room, dosed up with philosophy, psychology and a nice cup of tea.

How would a bird view us driving on a motorway?  They watch us do it, sat on power lines, probably laughing their “tits” off.  They must think we’re scared stiff, the way we run that fast and dodge in and out so precariously. 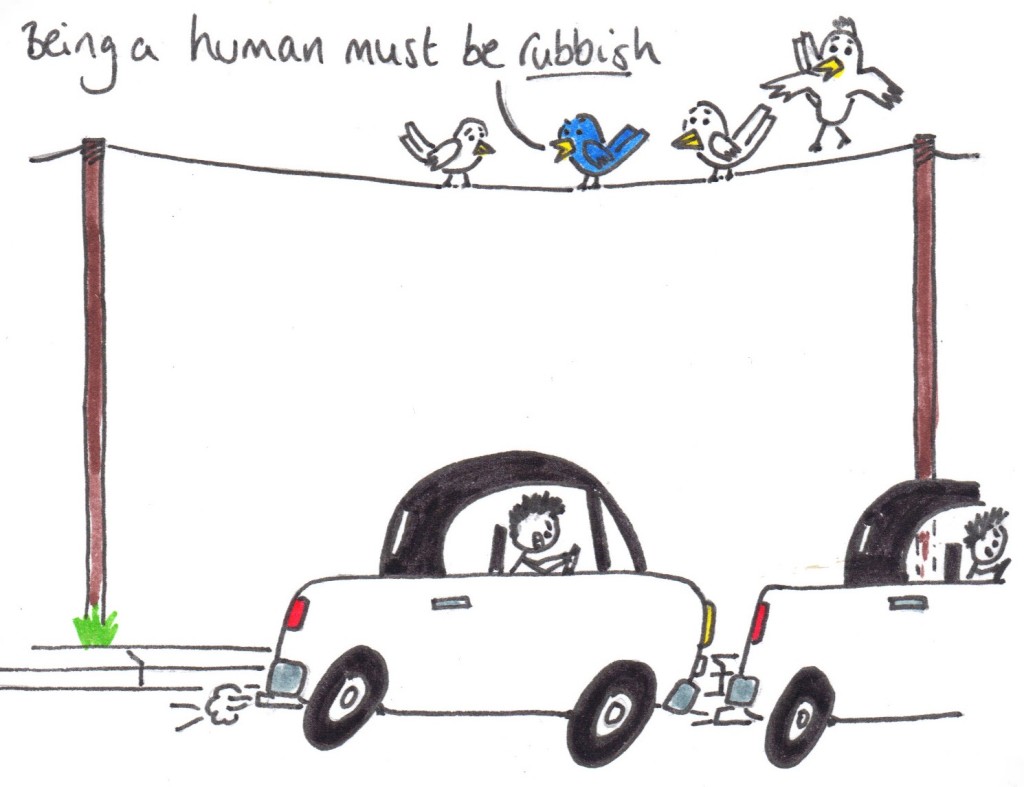 Just as sparrows are at risk of being eaten by sparrowhawks, car drivers are at risk of car crashes.  But car drivers are usually pretty relaxed and carefree in their driving, and often do it just for fun.  Why not the same with birds?  They sing a lot after all.  Their smallness might make them appear to move quickly and nervously, and nature programs say they sing to attract mates, but I think they do it because they are having a fucking awesome time.

Why do I find this useful and important?  Partly it is because humans and birds are all in danger of losing their habitats, but only one species needs to change what they are doing, and the other has many encouraging suggestions…

If sparrows are too abstract, take indigenous communities.  The closest thing they have to central heating might be a goat, which might also be their food, machinery and deity.  Disease and accident can strike at any time, and they don’t have the modern weapons to combat it.  Fighting and death might occur.  Sounds pretty horrible.  But why does all the evidence suggest that they also have a fucking awesome time, to the extent that they turn suicidal if this supposedly brutal and nerve-wracking way of life is taken away from them?  Instead of having books and experts, they have indigenous wisdom, and a mindset closer to the birds, where things like dying or being a bit cold aren’t judged as “bad”.

Human technology is bringing about an unsustainable situation, made worse by technological interventions to make it better.  I often get the feeling that my culture does not fear the destruction that it might be creating, but instead fears the way of life associated with a non-“progressive” (i.e. non-destructive) culture.

It’s a terrible fear of living in fear, which is actually quite funny when you think about it.  And when absurd paradoxes like this abound, I find it pretty easy to see how things we imagine to be terrible, are in fact awesome.

The birds tell me this, while they fly and sing and gorge themselves on delicious treats, and sometimes die.

When guns were invented, it gave any individual the option of massacring large amounts of people on a whim.  Although some people still do this, our culture has decided not to condone it, and most of us refrain.  But we do live in large heated homes and fly to Washington for a meeting and throw away perfectly adequate food and give children party bags of toxic plastic junk manufactured by slaves 5,000 miles away.  Maybe one day we will also be able to rein in these other things that technology allows us to do, and do more of what birds do.

The only way to create such a culture is to start doing it myself.  And before I can do this, I need to consider the idea that the sparrow lives well because she lives free, and her biggest worry is not the sparrowhawk, but the threat to her freedom posed by my culture today.