Mist on the M4

Looking out my window in the mornings towards the river has made me gain an appreciation for mistiness and obscured views.

The way of thinking that has influenced me most through life has favoured clarity, based on the idea that things can be broken down piecemeal, analysed separately, and reconstructed in order to be fully and objectively understood.  It is a very convincing approach.

It has been strange, and pretty exciting, to find that greater discoveries can be arrived at intuitively, through an objectiveless route that is vague and misty. It might sound like chaos, but perhaps it really follows the order of nature, the realm far too complex and interconnected to possibly understand or stand apart from.  It seems almost logical now to me that nothing can be observed objectively (unless under the illusion of objective analysis).

Objectivity seeks to identify and destroy every mystery and replace it with a rational explanation that fits the objective view of things.  But what about the mystery that provides the scientist’s eureka moment, or makes the poet’s work beautiful, the things she never knowingly learned?  The subconscious is always at work in any situation that the conscious mind is trying to chop up and control.

Thoughts and writings happen one word at a time; that is how the logical, conscious mind works.  But with nature and the subconscious, things happen in a sudden tangle, all affected by each other at the same time, like in a disco or speeding along the M4.  It’s too much for the separated logical brain to handle, but not too much for the subconscious brain, which is an intimate part of the complicated unfolding.  Maybe that’s why I started off crap at driving, and got a bit better when I relaxed (occasionally the same has happened on the dancefloor).

This kind of thinking is at work all the time in every moment of everyday spontaneous life.  If the rational mind was in charge, conversations would be prepared speeches (like your first phonecall asking someone out on a date).  On the street, we’d keep having to ask everything to stop so we can walk around and expect the different bits and get them to explain themselves. 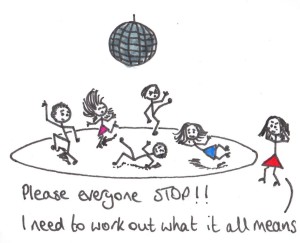 So why is it seen as risky or passive to lack clear, fixed objectives?  The irrational approach is not passive at all, as it is utterly part of the unfolding action, an intimate part of the experience.  Usually, logic is numbing, as it seeks to dissociate from feelings in order to explain them; it is passive as although the mind and voicebox are busy, they have stopped the complicated natural dance from happening, in order to break it down and exert some kind of control.  The irrational mind was already in a perfectly good place before the music was switched off.

I like the idea of my objective thought being a dull creature, a servant who needs to be let out of his room in order to help with practical, administrative stuff, and then shut back in again when it’s done.  And I love the thought that when there is no fixed point of destination, there is never such a feeling of being lost – I am just where I am.

I also like it when I find an ancient Taoist word describing what I have been clumsily experimenting with: kuan – ‘no-thought’.

This kuan approach is not possible when there are teachers, shareholders, bosses or targets to be served, as they all require objective output and the elimination of mistiness.  The rational Mind must dominate, and calls his friend Subconscious a lazy bastard and calls Heart an unrealistic softie.  Whenever this servant is crowned, he becomes a tyrant, and destructive things happen.

Having made choices that have freed me a bit from these objective demands (but still saddled with the conditioning unfortunately), I have begun to taste what it is like to enter the dance of chaos and uncertainty, and find that I am perfectly equipped to deal with it, that I am it.