The pursuit of unhappiness

The great paradox of our age: the things that are generally understood to make me happy, make me completely unhappy.

Is it possible that almost any piece of “common sense”, any piece of general advice, anything other than what is discovered by me, on my own, through hard searching, might only suit other people’s interests, and rarely mine?  Sure it is – how could something as personal as happiness ever be defined and delivered by someone else?

Some economists of happiness recommend the “consumption of experiences” rather than material items.  Brands providing consumers with “social currency” through experiences is the new frontier… not in happiness though, but in consumerism.  The consumer is still working his tits off, but for a holiday (because he is exhausted) instead of a car, and still not seeing his family, having time to be friendly, or discovering for himself what makes his heart sing.  Meanwhile, employers rake it in, and GDP measurers breathe a sigh of relief that the delusion is still intact. 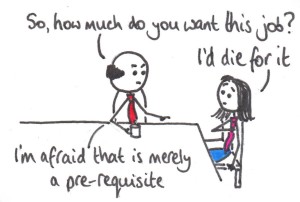 Money, progress, pursuit of status, they all suit that system wonderfully.

What is the biggest indicator of how those things that are supposed to make us happy, makes us miserable?  Choose one: depression, obesity, anorexia, male suicide, sexual abuse, alcoholism, workaholism, divorce… all rocketing ahead as we follow common sense.  All fuelled by the Perfectly Normal.  Right in my face but I look straight through it when I am subscribed to that system; I understand it’s happening but I don’t see how it relates to my Perfectly Normal life.  I either think it “has nothing to do with me” or “there’s nothing I can do about it”.  Two classic rationalisations in a twisted situation.

And while I’m atrophying at my desk I’ll think “I’m just fine”, and as far as business is concerned I am.  Obese workaholics are making amazing economic contributions that appear to outweigh the unmeasured (unmeasurable) social costs, so they should be proud of themselves.

Or maybe I try to do something – some green consumerism (still consumerism, naturally) or a bit of self-improvement like jogging (buy some shoes and an app and reward myself afterwards), both common sense suggestions to address a sense of malaise that I believe I am not alone in feeling.  Both guaranteed to reinforce unhappiness as long as they are guilt responses, rather than coming out of hard investigation into what truly makes me – just me – happy… and then acting on it.

I increasingly suspect that happiness lies in the dark (not “bad”, just dark) places where I don’t usually think to go; a deal with the underworld.  The common sense of consumerism has nothing to offer on that front.  The reverse actually – its forceful messages seek to keep me searching for happiness under the artificial streetlights, and away from moonlight. Hence the paradox. 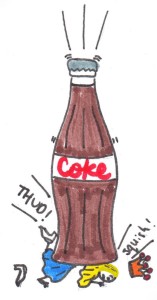 The princess’s golden ball lies at the bottom of the murky pond, the frog is actually a prince, and the beautiful queen is really a wicked witch.  These delicate offerings of ancient wisdom, the pointers away from the paradox, have been drowned by “Coke Is It” and GDP-ism.

If I am not self-directed and have not deeply connected with the magic that makes my soul fly, then I am a dead man walking, following the zombie herd.  And no matter how much world-saving, money-earning, or fashion-following I do, I will only breathe death into it.

But when I do begin to ignore common sense, drop the water wings of modern culture, and dive to the slimy depths, I discover I can breathe below the surface of things… and that’s when the lifeblood does begin to circulate.

Could it be a possibility?  That the things we can make ourselves miserable trying to obtain, actually make us even more miserable?  So deeply mistaken by illusion that the truth sits like an elephant in the room?  This absurdity is becoming increasingly obvious to me.  Martians, gods and other cosmic forces must be crying as they watch, either from laughter or grief.

Future generations might laugh too, as long as we haven’t entirely burned their house down in the pursuit of unhappiness.