I was interested to find out a few facts about Queen Elizabeth I’s famous and celebrated face.

When she was a young adult, she suffered from smallpox, which left her face scarred for the rest of her life – partly due to the disease, and partly from the mercury she was treated with, that burned off the top layer of her skin.  This is why she wore the white makeup, also to hide the signs of ageing.  This white make-up, called ceruse, was a mixture of white lead and vinegar, and was poisonous.  The disease also left her half bald, so she wore wigs, which were decorated with pearls but were crawling with lice. 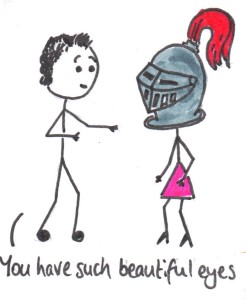 She bathed 3 times a year, and covered up her B.O. with pints of perfume.  Her teeth were mottled and stained, so they were cleaned with a mixture of honey, salt, pumice and brick dust.  It made the stains go, but also rotted away most of her teeth eventually.  Her lips were reddened with vermilion – red crystalline mercuric sulphide – which ate painfully into the flesh of her lips and left them cracked.  Belladonna was dripped into her eyes, which nicely dilated her pupils but fogged her vision.

Her advisers made sure that no-one drew any attention to these conditions, on pain of serious punishment, and wonderful portraits were instead made of the Queen of the Golden Age.

So:
– She hid her wounds with make-up and insisted they didn’t exist so she could appear faultless, while meanwhile they festered 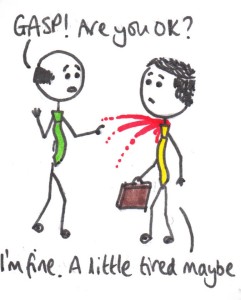 – The measures she took to cover herself up were poisonous to her system, and permanently uncomfortable
– Her personal moments were dominated by purely cosmetic matters
– She couldn’t see properly through her own mask
– If anyone spoke the truth, or portrayed her as ugly, she had them silenced
– So she was surrounded by obsequious sycophants
– And her habits really caught on; her agonising sacrifices became the height of fashion, which made it all seem completely normal to brutalise your own face

Could Queen Elizabeth’s face from 500 years ago be a worryingly accurate metaphor for our own culture today?