I met a storyteller this year who told me, gravely, that if he does not totally understand the story he’s thinking of telling (preferably by having lived inside it), then he shouldn’t tell it, as to do so is damaging and irresponsible.  I’ve picked up that with several native American tribes, when a person was ill, the first thing they did was to find out what stories they had been listening to; they might have been Bad Medicine.

Around Christmastime there are loads of old stories going round, but so many of them just seem to be empty now – I wonder whether any tellers understand them any more, and I wonder what might be lost, aside from just the stories’ meaning. 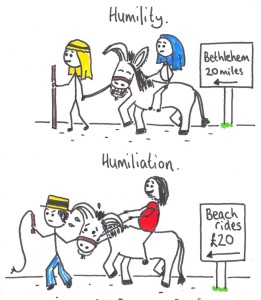 Take the story of the birth of Christ.  Mythologically speaking, the donkey and the virgin and the child and the angel and the shepherd and the oxen feeding on hay and the gold and the myrrh and no room at the inn all symbolise different parts of my own earthly human nature or experience.  But I have no idea what they do actually symbolise, as I have never had a conversation with anyone about it, especially when growing up, when I really needed it.  Emptied of meaning, it turns from a deeply valuable source of guidance and inspiration into an annual re-run of Eastenders, just a passing seasonal distraction, a donkey ride.

That’s one of the main features of the modern approach to entertainment – the replacement of the need for a busy person’s own imagination and no requirement to think.  Mythologically, Christ dies before even making it to the Cross, and the Christ in me has less chance of ever being born.

When mythology and symbolism are lost, I might then go on to make the mistake of believing that these events actually happened.  Rich metaphor degenerates past mere historical fiction and into true events.  And I might spend my time trying to work out the logistics of what the shepherds did with their sheep when they buggered off to follow that star, rather than exploring the image.  Instead of following the direction it suggests, the metaphorical compass gets worn like a pretty necklace. 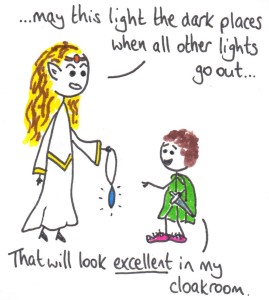 I might even take it so far that I want to visit the place where it happened.  Last week someone said to me “Did you know that all the characters in Winnie the Pooh actually represent different traits within us?” No, but what a wonderful thought; I wish that had considered that 3 decades ago!  Instead, I visited the Pooh Sticks Bridge down the road in Ashdown Forest (I didn’t get charged, fortunately, but it certainly does attract lots of valuable tourist traffic to the area).  When symbols get mistaken for the real things they represent, God grows a beard, becomes a He, and says he’ll torture you for eternity if you are naughty.  Mythology talks empoweringly to the soul, but it’s quicker and easier to take it literally as mere entertainment… or use it to formally coerce people.

Which is where Santa comes in, the patron saint of Behavioural Science and Consumerism.  He is sponsored by big business, which I and many other people lament (yet have totally and meekly accepted).  He is Coca-Cola’s version of Saint Nicholas (that is something you can take literally), a symbol of generosity turned into a bright red man who makes me buy things in His name and bribe my kids to Be Good.  The story makes no sense as there are many logistical issues (we have no flat roof for the sleigh, we have no chimney, he’s a fat bastard anyway), and the symbolism has been consumerised to nothingness.  “Daddy, is this present from you or from Santa?”  “Why did he use our wrapping paper?”  The lie is so mindlessly told that imaginations never leave deep freeze in the North Pole.  And ultimately, it leads to an inevitable climactic breach of trust… which also gets paid no mind, it just adds to the rest.

My children will suffer if I destroy the magic and meaning of generosity.  Not only has the meaning been lost, it seems that it’s been forgotten that there was ever any meaning in the first place.  Elsewhere in the year, through a similar process, I might casually destroy the magic of community, intimacy, creativity.  When the secret, subtle channels of symbolism die, an ancient route to secret, subtle real things is severed and the real things can die too.  All that’s left is empty words, busy parents and temporarily obedient children who aren’t talking to their souls.

Santa ain’t coming to town this year.  I think we’ll hide a couple of presents in the garden, deny all knowledge and let them make up their own stories.

Magic can exist, if a space is created for it to return to.

One comment on “Santa Claus ain’t comin’ to town”