Ever get the feeling that we have totally run out of Stuff we actually need?

Businesses are selling every product imaginable.  And recently I have noticed how many zillions of “workshops” there are now to attend, for any issue that a product purchase can’t solve.  Perhaps we don’t really need things like this any more, but we have to keep inventing businesses and workshops, because our way of living requires us to make money, so we have to try our best to create needs and persuade others to spend their money on us.  It’s like some big black hole of unnecessary money and needs that feeds itself until it collapses.  And its gravitational pull can suck away all of my freedom if I’m not careful.  How do I resist? 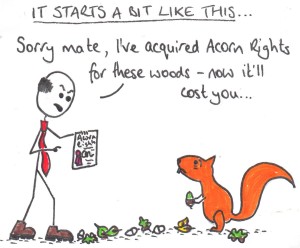 What saddens me is that this system forces the monetisation of things that just never should be.  The word ‘monetise’ to me implies trying to drag something into the economic system that wouldn’t naturally be there.  This process involves the outsourcing of everything imaginable until I am a mechanical unit, unemcumbered by the distractions of living, and able to focus purely on my own exhausting work of trying to monetise things.

I have the desire to “do good”, and I also realise I need to make a living somehow, unless someone quickly invents utopia.  The holy grail is often portrayed as the combination of the two.  The idea vexes me though. 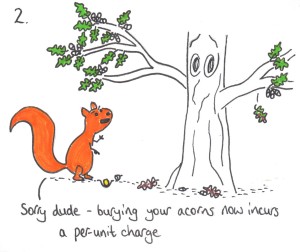 I often hear grail-questers (including me) mournfully observe that “there’s no money to be made in good causes.”  Rather than that being a problem, I am increasingly seeing it as a Golden Rule.  What good will it do to chuck Good Causes into the black hole?  In my culture, monetising good work seems to involve “scaling” it so as to be worthwhile, vomiting out endless marketing white noise to outshout others and make the news, and building an organisation around it to do all these things, which detracts from the very Good that is sought to be Done.

And it’s not just the poor thing being monetised that suffers, it’s everything connected to it. 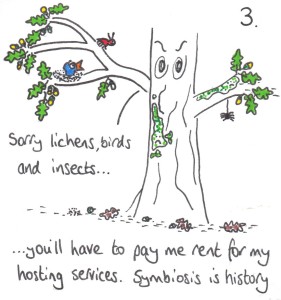 Two examples:
– Small acts for neighbours have been devalued, often in favour of saving anonymous lives on the other side of the world instead.  It’s clean and crisp, and avoids the messy responsibility that comes with being directly involved in real people’s lives (but hang on, how am I linked to that anonymous person’s poverty, I wonder…)
– For many years, housewives’ unpaid house-work has been devalued in favour of husbands pursuing their valuable careers.  I have been a housewife quite a lot in the past couple of years and would resent being told that it is of little worth.  I have been told that it is self-indulgent to not do paid work, but from my housewife point of view, nothing seems more self-indulgent that pursuing an all-consuming career to pay for things that aren’t needed, leaving someone else at home to pick up the pieces behind me

Mixing “good work” with making a living might actually be the crafty black hole talking, which wants to expand to occupy the whole space in the form of careers and economies, and workshops.  Would it result in something beautiful, to ask the devil and the saint in me to collaborate?  Perhaps as well as being undesirable by turning sacred things into cash, heaping everything together might simply be too much to expect.

Why not split them?  Participate sparingly in the black hole to earn enough money for what’s needed, and leave the rest of the time for house-work, self-work and good-work, unburdened by the distortion of economics. 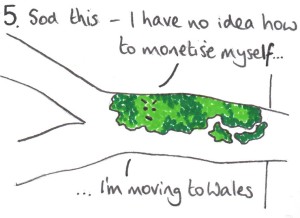 Sounds simple, but in order to sufficiently resist the all-consuming pull, I must face two big questions:

If my needs are endless, and if I’m working from a place that’s really All About Me, then I must take up permanent residence in the vacuum of the hole. 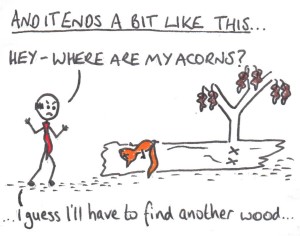 Or I can think again, and start valuing other things above paid work, and act accordingly.  This might let me approach life like Art – chaotic, unmeasured, surprising and free, rather than Business – structured, analysed, controlled and fretted about.

Ultimately, I strongly suspect ‘work’ lacks the magic to actually address the things that really matter, so it seems important to resist its destructive monetising force field.