Is it truly possible to be a “changemaker”?  Or are they incompatible words that should not be stuck together like that?

Sometimes, something happens that makes the world change.  This might be an invention – say the camera or the atom bomb or the internet, an idea or concept – perhaps numbers or farming, a tumultuous event like the French Revolution, or an individual event – perhaps like the desperate Tunisian who set himself on fire 3 years ago, or Martin Luther King’s speech.  Or it might be on a smaller scale: a village near me is still reeling delightedly from a visit by John F Kennedy in 1963, a few months before his death.  Life there has never been the same somehow.

Some people are very concerned about the direction (and speed) the Western way of life is hurtling, me included.  Out there now are armies of changemakers, from the highly organised to the chaotic, seeking to influence this trajectory.  It is very healthy, I think, to have voices like that out there.

I must admit that I have indulged myself in imaginative fantasies of being a changemaker.  Not in any tangible way, mostly in the same way that I like to pretend it’s me performing when I listen to Jay-Z.  But even the fanciful crusades I have in my own head carry a touch of caution. 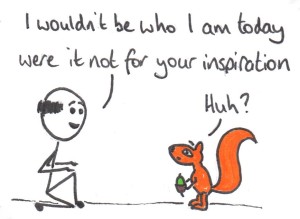 As far as I can tell, in none of the examples above did a person originally think “I’m going to change the world / nation / town with this”.  I suspect that if they had, I wouldn’t be talking about them now, as the vital ingredient would have been absent.  No matter how openminded I try to force myself be, I hate being actively influenced by someone (especially salespeople, but sometimes also changemakers).  Such experiences feel a bit like my view is being conditioned, like a bunny in a behaviour experiment (except bunnies are immune to shame).  However, when I come across someone immersed in something fabulous, quietly but with vision, I delight in being influenced by it, and it could quite possibly change my view or my life somehow.

Just as I am unlikely to knock Jay-Z off his perch, most changemakers won’t fulfill their wild dreams; the nature of things is typically that the timing is not right or the idea is all wrong to capture many imaginations.  That’s OK, as long as that person isn’t staking her happiness on its success. 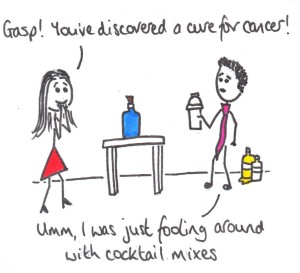 The “changemakers” I really like are the people who are doing important things without really realising it, when their outward efforts inadvertently bring subtle or unexpected positive change, normally because they love something.  Perhaps cultural change does not start from a changemaker on the fringe and work its way in, but springs up right under our feet, seemingly disconnected from its unwitting catalyst.

So that just goes to reinforce for me that it’s wonderful for people to feel free to do their thing, as long as magic and chaos is equally free to slowly and uncontrollably pick and choose whether any of it makes any change.

I am certain the world needs lots people operating on the edgy fringe, but perhaps the true contribution of a changemakers might be slightly different than they think.  (That’s not a paradox, for me it’s just how magic works).