The wisdom of horses

I cycled to my new train station for the first time last week.  It’s a 25 minute ride along an old railway, full of trees, fields and ponds either side, all that good stuff.

It was 7am, the mist hadn’t lifted, the sun was rising and beginning to burn it away.  I passed a field with a horse in it, and the combination of horse plus mist plus sun was magnificently beautiful.  It was literally inspiring actually, because it made this post pop out.

I ought to thank the horse really, but I doubt I’d be able to find her again.  She wouldn’t care anyway, and she’ll never know that she put magic in my morning. 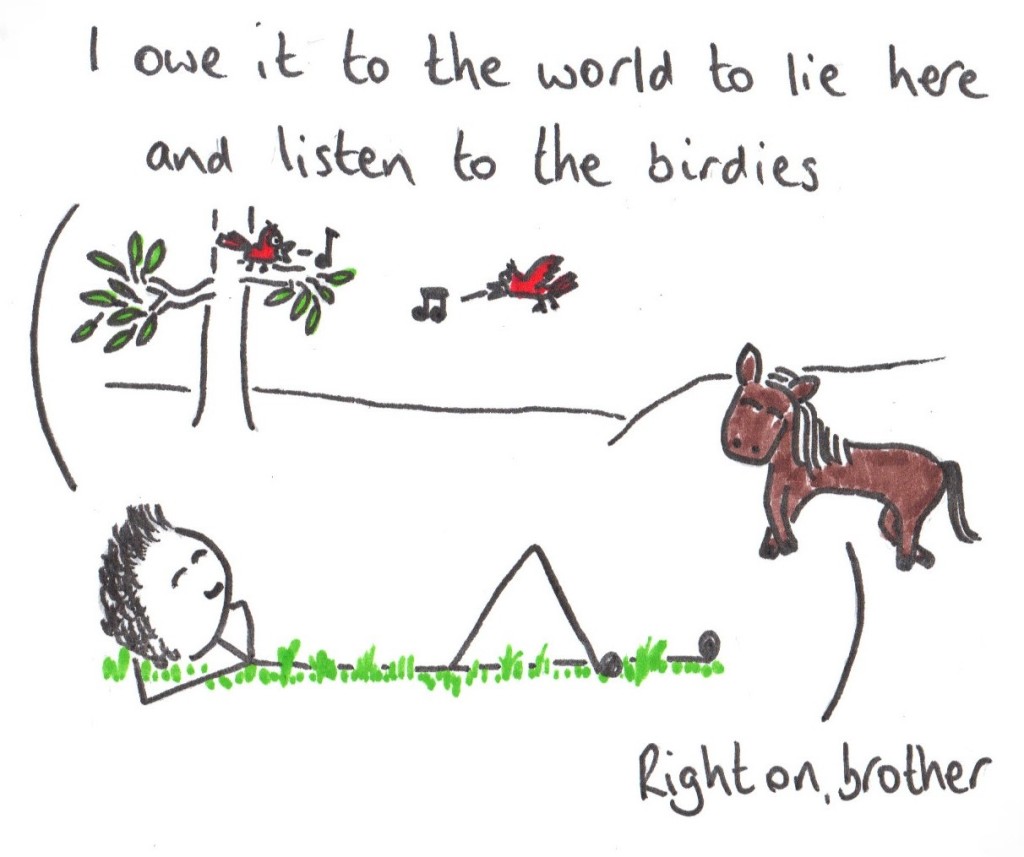 She’ll also never know that when she bites the grass, she helps it grow.  She also helps flowers grow and insects to thrive when she tramples around and covers the field with poo and wee.  Trees breathe in her exhaled CO2 and breathe out fresh oxygen.  Cyclists marvel at her beauty.  She doesn’t know this, she just does the horse thing.  She stands around in fields and doesn’t think to give a toss.  And vitally helps the world go round in the process.

I imagine it would be quite different if the horse had tried to brighten my morning by dancing an unnatural jig, or had attempted to sell me its shit if it’s that good. The magic would have been lost.

The wisdom of horses is that they don’t try.  Being a horse is enough, and it makes a difference in itself, with no artificial effort.  No meetings today.

Could I ever understand that wisdom?  Humans are animals, right?  We eat and shit and stand around.  And we can also make things and we can love and we can sing, for no other reason than because it comes out, like a steaming jet of urine on a cold morning.  What makes me think that doing the primal human thing isn’t enough in and of itself, of great magical value?  That just in simply being, and doing what happens to come to me, just playing a minor but natural part in the flow of the universe isn’t vitally important?

“NO”, says the programmed voice in my head.  “You are better than that.  So you must pursue causes and dance elaborate jigs and sell your shit.”

“OK”, I say, and I drive my car around and meddle in other peoples’ affairs and contribute to my landfill site.  And I stress about whether I’m doing enough, and occasionally about the harm caused by what I’m already doing.  And I strive to practice compassion to be a better person, exercise to be fitter, study to be smarter.  And at no point do I shut up and just contentedly do the human thing.

And meanwhile, the horse is still in the field, not givin’ a fuck, munchin’ on grass and makin’ the world a better place.