If I had more money, I would…

Money is a fascinating phenomenon, with a powerful gift to make humans miss the point.

All the time, I hear money being used as reason why certain things can’t be done.

When this refers to buying a holiday home in Martha’s Vineyard, then that is pretty binary.  But most of all, I hear it around matters referring to freedom and choices.  For a long time I heard it most from me. 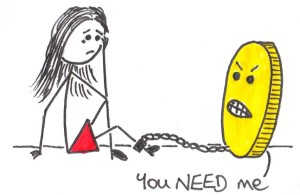 I am coming round to think that, for a person with reasonable physical and mental health, money is rarely a truthful reason to limit choice in life.

“Easy for me to say”, since I have been lucky enough to have had a “good career” and some money to save.  And that is true of course.  But it doesn’t have any effect on the truth that lack of money is a feigned disability.  There are many cases of people deeply and desperately in debt finding freedom, and it always hinges on them following a path of letting go.

If the props of pursuing careers and buying things can be dropped (a choice which is more of a journey than a decision), then a cycle of dependency disappears, and freedom begins to make a return.

How that freedom is experienced must depend on each person’s particular case.  For me, factors behind my own choices included:

– My relationship with uncertainty, including ‘money fear’
– My appetite for risk / adventure / whatever you prefer to call it
– My ability to understand my wife (heavily exercised once its flimsiness was first revealed)
– My wife’s ability to view me positively and handle her unrequested hassle
– My willingness to listen to instinct instead of logic

It’s not the whole picture, but it strikes me that ditching the two crutches of career and spending escalation, along with ceasing to tell myself crappy stories, begins to give choice a chance.

It’s not the ultimate prize, but it’s certainly a door into a (confusing, disturbing, exciting) labyrinth which might feel nice and juicy.