I was brought up in a culture of reliance.  My ancestors lost the art of self-sufficiency, so I never even learned it.  And I suspect the option of even practicing self-sufficiency moved out of our reach when the world’s population reached the half billion mark, property rights were introduced and technology sped the world up.

So, cash is a necessity for me, and for the foreseeable generations, and everyone must find a way to live alongside economics and business.  But the concept of ‘business’ increasingly sets off warning signals for me…

Business is so pervasive.  Everyone seems so unnaturally up for it, and willing to define themselves through it (“What do you do?”).  That in itself is a bit concerning.

But more than this, business seems to carry the same traits as food, alcohol, sex, drugs and other addictive, inebriating activities.  All these things are often used (abused) to fill an empty hole, but really they deepen it… so it all feeds itself marvellously.  Look at the burned-out businessman, or the entrepreneur exhausted by her “passion for business” – they look the same as any druggie and share much of the same antisocial, destructive behaviour.  Overindulge in business at your peril (stress, obesity, divorce, and a big mortgage).  But in a culture of business, it doesn’t seems like indulgence.  Just like in a crack den, it seems entirely normal to smoke crack all day. 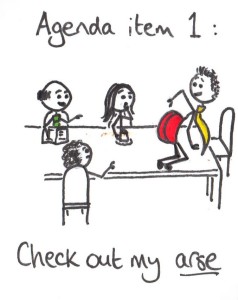 I like the idea that business is simply a curious human trait.  Clever people are we, and business has become the prominent tool we use for roleplaying, posturing and attention-seeking, much like a baboon does with its bright red arse.  Business-ing is carried out with such amusing self-importance; buildings filled with strutting peacocks.  Go into any meeting with this attitude and watch yourself collapse into giggles, same as if you imagine them naked under their powersuits.  When I step back and look objectively at business these days I am frequently struck by the hilarious nonsense of it all.

But it’s less funny when the addictive qualities manifest, when the whole thing is taken too far and serves as a gateway for harmful childishness.  Losing sight of the nonsense and taking it too seriously allows appetites to get out of control, and things start to get destroyed: freedom, health, relationships, and everything up to and including the biosphere.  This is happening all around, but the puritanical worthiness of business seems to have a blinding effect, like meths.

Why the obsession with business?  It so often goes way beyond “putting food on the table” or “paying the rent” or any of the other worthy excuses trotted out.  “Securing the future” is an interesting one, in the way that it seems to get sidelined in favour of constantly raising one’s living standards, security always one step out of reach. 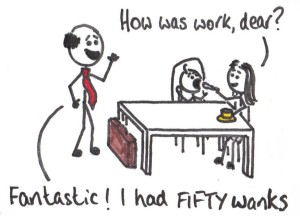 It takes real maturity to draw the line of Enough.  Business often seems to me like childish compulsiveness that isn’t grown out of.  It is natural behaviour for a teenager to play with himself all day.  It’s not OK when he’s still at it at the age of 50.

Pursuing business starts off as a necessity, but quickly turns into an alluring distraction, a reassuring crutch, a greedy addiction.  Business is often seen as the way to bring meaning to life: an identity, a legacy perhaps.  People put up with much boredom and misery for this thin version of living.  But at the expense of bringing life to the meaningful, business instead tends to glorify the meaningless (a much easier thing to do).  There is no magic in business; it is in its nature to suck the life out of things and replace it with a made-up story, a bag of words and actions aimed at provoking a consumption event.

Alternatively, pursuing human-ness carries little economic logic.  But I am convinced it has immeasurable magical value.

Human-ness and business seem to have little in common other than that they both require dedicated practice.  So, where to put their time and energy is everyone’s choice to make – a momentous choice, which will lead to very different futures for many more people than just the chooser.