One big horrible piece of conditioning that I never knew I had, and have only recently begun to understand, is to trivialise the sacred. Not too long ago, I would have laughed this notion off… which would in itself be one of the clearest manifestations of the habit.

The tendency to take things for granted has isolated me from the sacred.  Nature is a good example: under my nose, generally ignored, and responsible for creating and maintaining my existence.  Trudging over deep layers of joy and fascination.  Nature, being modest and sacred, can be easily and casually denigrated, for instance by calling myself a hippy treehugger for hugging trees.

Maybe I can use boobs as another example?  There is a petition running to ask for an end to Page 3 displays.  Now, I was fascinated to read in a book called The Naked Ape

that it’s quite likely that human breasts evolved to efficiently arouse men, not to efficiently feed babies.  It is impossible to deny the primal joy that they give rise to.  Boobs are sacred.  But in displaying them for all to see (especially artificially), they can be trivialised and rendered meaningless and confusing for both men and women. 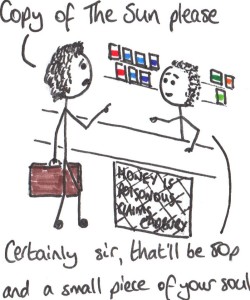 Anything that is too easy is no longer sacred.  Honey used to be prized and sacred; we had to wait patiently for it, and many tough and painful ordeals had to be overcome in order to gain it.  Nowadays, Cadbury-laden impulse aisles have seen an end to that particular deity.  Similarly, Page 3 injures the gods.  Men need to work hard at building a meaningful relationship for the privilege of worshiping boobs (and in doing so, they will probably find it’s not about boobs any more).

Anything that is sacred is very easy to smash.  A termite nest is a wonder of the world and takes some seriously ingenious collaboration to build up.  And it’s crucial for the wellbeing of a squillion inhabitants.  It can of course be kicked over in minutes.  The same goes for dreams, self confidence and trust: to not honour my own, or be clumsy or disparaging of other people’s, is truly sacrilegious.

Every time I am too busy to stand in awe at the beauty of my daughter’s smiling almondy eyes, or carelessly buy and then throw away something made of ancient precious molecules, I kill a little bit of my human-ness and impede those around me from thriving.

The sacred does not lie in some super-human paradise, dished out by an all-powerful being or by Louis Vuitton.  In a delightful twist that confounds my conditioning, the gods are much more accessible, right there under my nose in the everyday things.  Blessed with abundance and, in my culture, cursed with normality.