NO to stuff, YES to people

This has been one of the most important reminders I carry around with me.

There are two major problems that I quickly discovered after switching off auto-pilot the other year.  Previously, stuck in mainstream business, education and media, I was seemingly unable to connect the simple dots and gain the perspective to see them.

1. Stuff
‘Stuff’ doesn’t make me happy beyond the impulsive urge (common knowledge, but seems to have little impact on behaviour).  It is mostly unnecessary, it’s just that I’ve become soft and reliant on it.  It costs money so I have to spend my time working, and ignoring health, relationships and most natural urges.  It creates pollution and resource depletion and involves stealing space that other animals can use for better purposes, concepts that usually feel too overwhelming to allow thinking about, best denied or avoided.

2. People
Auto-pilot makes me less human.  I help less, I care less.  I don’t mean to be like that, but I’m just so busy.  Old people get lonely.  Kids get ignored, machine-reared.  Staff get treated like production units.  Treating others – and getting treated – like this makes me slowly, deeply ill.  And when I’m sick, I do sick things, like saying Yes to Stuff and No to People. 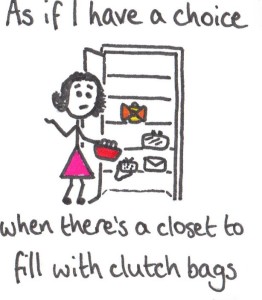 No to Stuff frees up a huge amount of time, energy and money to live a better and more compassionate life:

Saying No to Stuff addresses one of the gnarliest roots of the big problems we are facing: a religion of consumption.  And after a while I found it surprisingly easy to get into the habit of saying NO.  Renunciation is actually quite fun.  And making a personal connection with the sort of factors that lie behind the deeply worrying phenomenon of consumerism is a pretty powerful motivator. 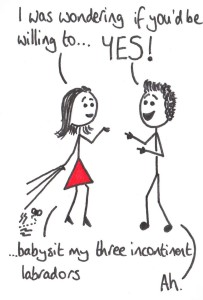 Much as I like spending time alone in the woods, being a human makes me a fundamentally social animal who gets most fulfillment from discovering my power to help others.  It seems that I just need to get over myself first, including getting past Stuff.  When I manage to, the results are simple but wonderful:

– Can I spare the time to drop in on my elderly neighbour?  YES!
– Can I listen intently to this person without thinking about Game of Thrones?  YES!
– Shall I help this person who has asked for a favour?  YES!
– Can we play ruff-and-tumble Daddy?  YES!  (Shall I check my emails first?  NO!)
– Can I make my kids brekkie and walk with them to school?  YES OH YES!
– Am I mindful of what the people around me might be feeling?  It feels nice to be able to say “I’m Trying”

Saying Yes to People addresses the other critical dynamic as I see it: people connecting with their true nature and with each other.  Being more human by saying Yes to each other.  Humans are not inherently harmful creatures; but there’s nothing more dangerous than a person who has lost touch with their human-ness (or, even worse, several billion people losing it).

Sadly, ‘No to Stuff, Yes to People’ remains a reminder for me rather than an achievement; I am still a threat as far as fellow humans and other species are concerned.

But it’s a really good start.

2 comments on “NO to stuff, YES to people”