I have four very recent observations of where my civilised-ness has sought to squish my wildness:

– Really needing a wee, and furtively hiding myself deep in a bush for fear of being slapped with an ASBO.  As I emerged I came face to face with a dog liberally sprinkling a lamp post, a big grin on his face.  What’s wrong with my wee?
– I jumped down from a tree, to be treated to a mild telling off from a Clapham Mum who felt I was vandalising the tree and was setting a poor example for children.  But aren’t I 98% chimp?
– I waited until it was dark before nipping out with my little saw to harvest some dead branches, in case of being told off again, or arrested.  Beavers and squirrels do this all day, and they are considered cute
– I was ‘caught’ singing to myself as I walked along the street, and felt dreadfully embarassed.  I even felt self-conscious in another situation where everyone else was also singing.  Imagine how tragic it would be if birds felt the same way

Why do I feel I have to inhibit even really low-level instances of wildness?  If I breach the peace through inappropriate exposure, defacing public property or noise pollution then that’s one thing.  But I have noticed that even the slightest glimpses of wild animal behaviour is frowned upon.  Mostly by me – by the apologetic, civilised part of me.  After all, most of the above cases were just my own insecurities in action, without anyone else’s participation.

But as I begin to notice and contrast my moments of wildness and civility, I find how much I’m missing out when I’m being too ‘proper’.  When wild (nothing particularly feral – just climbing, frolicking, or simply weeing in the woods), I feel very alert, agile, and happy.  My civilised moments feel so dry and sterile in comparison.  And so repetitive – whereas no treetop is the same, I find.  I wish I could say the same about meetings and dinner parties. 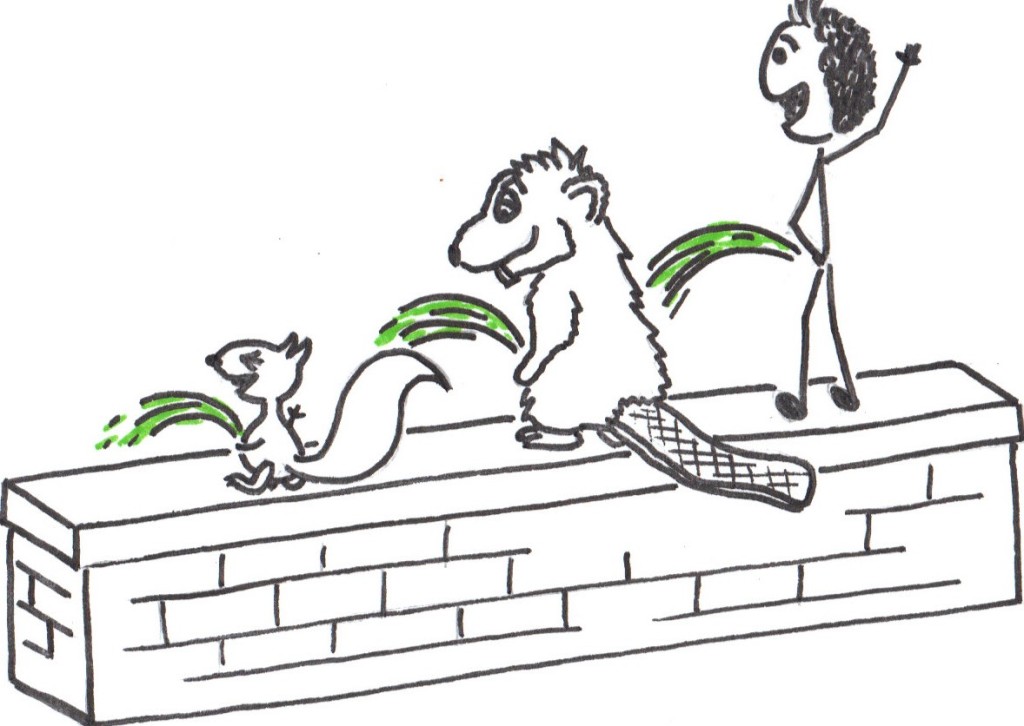 What is normal behaviour for animals, is so often considered inappropriate and rude for humans.  It is a great shame that we are in a society which typically has room only for civilised behaviour, and wild behaviour is actively discouraged.  It’s not merely a shame to repress and denounce the primal, it’s a tragedy, for culture as well as for individuals.  Whenever there’s a dominant species, especially one that feels god-like and apart from the non-human world, then the beavers and birds and everything else suffers – exploited or just ignored.  And each member of the dominant species suffers too, they just might not notice it.

What I do find particularly interesting is that when I drop down from a tree I have been climbing, as well as passing dogs always wanting to come straight over for a chat, occassionally one of my own species comes over, delighted and fascinated that I have simply been climbing a tree.  The primal is always there, not matter how much it might be suppressed, and it does have a habit of popping out of anyone; sometimes gladdeningly, sometimes embarrassingly.

There is a lot to read in the papers about loss of animal habitats and widespread extinction.  But I also think we are brutalising our own human nature through careless, thoughtless civilised-ness.

When I do this to myself, or allow a cultural voice to influence me, I inhibit my freedom.  I isolate myself from a dimension that is a source of joy and authentic human-ness.  That is being very ungrateful for a wonderful gift I have been given.

Which, like my mama always taught me, is an unforgivably rude and uncivilised thing to do.