I grew up believing in the importance of decisiveness.  It is a crucial trait for a strong man… isn’t it??  But recently I have come to appreciate the careful practice of procrastination, and how it can vastly enrich a decision and the long tail of its aftermath.

Together with my wife, over the last year I have been considering some Big Questions, and all the tricky practical bits in between.  What is important to us?  How do we want to live?  What is the best way to educate our children?  Would a grizzly bear be able to beat up a tiger?

I was interested to find out that when I tried to apply my traditional decisiveness to this complex and unfamiliar situation, it just didn’t work.  It came out as impetuous, verging on reckless.

When I looked closer, I discovered that my attempted decisiveness was being fuelled by all sorts of strange things:

– Discomfort with not knowing what might happen; wanting to look/feel in control
– Fear about what other people might think or say for as long as I don’t have an “answer” 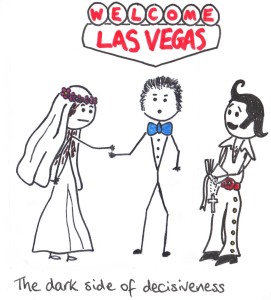 – Ideas of what ought to be done; usually the “sensible” thing
– My image of what sort of man I think I should be

In short, it was being driven by insecurity.  Not a great basis for a decision, but so often the case.

Last year I saw a guy called Frank Partnoy give a talk at the RSA called “Wait: The useful art of procrastination

” (I held off buying the book).  His message: the longer you can delay action, the longer you have to observe and prepare, and ultimately make a better decision, as long as you are able to act quickly when the time comes (and that you do actually act).

At the time, I didn’t really reflect on it that much.  But now, as certain decisions loom, I realise that we may have been inadvertantly been taking his advice.  I have created uncertainties and worries in my family life by leaving behind what I used to do and think, and so has my wife, in her way.  Rather than rushing to eliminate them (which was an almost irresistible urge), giving those uncertainties some time to exist (dwelling in the land of I DON’T KNOW) has allowed some interesting and unexpected options to emerge.  And a clear and appealing picture has slowly formed of how we would like to design our lifestyle from this point on. 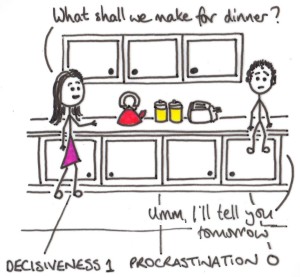 Any of these options carry possibilities for everything between total disaster and utter amazingness.  Since we have granted ourselves the time to work through the initial overwhelming confusion and chaos, we feel free to walk deliberately into whatever might come and deal with whatever happens.  Perhaps this is what it’s like to trust intuition instead of intellect.

And the Big Decisions actually don’t feel so big now; they are more like fun experiments.  We have not removed any uncertainty, but we feel much better equipped to experience life more vividly; procrastination has served its full purpose.  Time to act.

Procrastination has revealed new paths and removed old fears.  Now I have experienced its wisdom, I’m all for it.

Nice to have posted this finally – it has sat in my ‘Draft’ folder for months.