Telling the stories that don’t get told

Last month I had a pretty special experience.  I am on a course where I am learning the wonder of the woods: first for myself, and then how to take other people there to share the magic.  One thing we have particularly been encouraged to do is to offer stories at the fire pit, in the ‘oral tradition’ (i.e. memorised and performed, rather than read out). 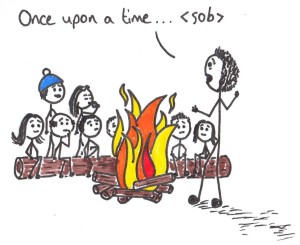 Standing in the woods at night round a fire telling a story to 20 lovely people is a deeply primal and moving experience.  The first time I did it, I chose a letter written by Chief Seattle in 1852, the dying voice of an ancient moral code that was being replaced by the new, unproven, European civilisation.  I was thankful I could blame the woodsmoke for the tears in my eyes.

For the second time round (which will be at the end of this month) I have decided to tell a short story of my own making.  Writing it was fine – it just kind of popped out one day.  But even thinking about delivering it has turned out to be surprisingly tricky, and that’s without even being stood by a campfire.  It can be difficult sharing stuff that’s close to the heart.  However it’s a real privilege to have the chance to do it, and I’m looking forward to trying.

Not everyone is lucky enough to be able to tell their story.  Often it is because it’s too traumatic, or there is no-one listening.

This is where Nina Burrowes is stepping in.  Dr. Burrowes has been a psychologist for many years.  Now she is the Cartooning Psychologist. How cool is that.  But why?

It’s because she has found that academic work, although well-meaning, usually ends up in an archive, maybe having been read by a handful of fellow academics.  Nina’s area of work is people who have experienced extreme vulnerability, through rape or sexual abuse.  The journeys and resultant human stories that come from this are epic – trauma, loss, rediscovery, courage and compassion.  They are real but they don’t get told round campfires very much.  Stories like these not only give a voice to a very vulnerable group of people, but they also can teach us about ourselves.  So she’s going to tell them. 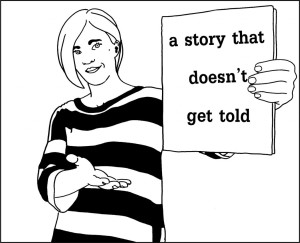 As a psychologist, she has recently worked with a group of women who are on this journey.  She just published a very readable research report that describes the healing experiences they had when they began to confront and tell their stories, together (here it is).

But as a cartooning psychologist, she intends to transform the story from a research report into an illustrated book.  Through their simplicity, humility, and sense of fun and humanity, cartoons can sometimes communicate in a way that normal words and pictures cannot.  This is particularly true with gritty, difficult themes and issues.  This book will not only be a useful resource for survivors of rape and sexual abuse, but can also help any reader learn about their own relationship with courage and vulnerability.

Here is a link to her website that decribes in more detail what she is doing, including the research report she has just published.

Here is a link to how you can support her and allow the work to get done, if you feel so inclined (it’s not just about funding).

One comment on “Telling the stories that don’t get told”