It is estimated that 13.7 billion years ago, a great big noisy explosion released energy and elementary particles which began to create the universe.  Over billions of years, these particles assembled themselves into complicated things like the Great Bear, Andromeda and planet Earth.  All created by extreme violence, followed by relentless experiments over long periods of time. 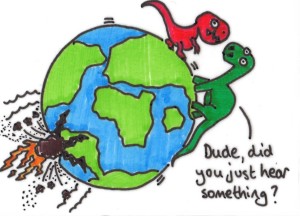 The creative destruction continued, and on Earth there have been five great extinctions apparently, including:
– 430 million years ago, when most of us were in the sea, 60% of the unlucky ones like clunky trilobites (who did well to get things started, but were a bit shit in the bigger picture) got wiped out.  The survivors got back to their slow work
– A really big one happened 250 million years ago, when 96% of species were wiped out.  Life on Earth today is descended from the remaining 4%, which slowly but impressively bounced back to build dinosaurs, and ancestors for wasps and dandelions and people
– The famous one happened 65 million years ago when the dinosaurs got it from an asteroid.    Many fledgeling mammals escaped and were granted extra time to evolve into ever more complex life forms

Violence has played a big part in making the world as amazing as it is today, and still does.  Tigers are amazing because they have cool camouflage and massive teeth to crunch deer.  Deer are amazing because they have rotating ears and quick reflexes to get away from tigers.  The more millions of years they violently co-exist, the more complex and clever they both get.

Humans are amazing because we can make medicines and plastic forks and cities, which are also violent and destructive.  The big problem is that our progression is a million times faster than traditional evolution.  With every passing year we jump to new heights, and so does our violence and destructiveness.  Humans are not evil, just as an asteroid is not evil, but both are remarkably damaging.  Some say we are potentially heading towards a sixth extinction… caused mainly by us, as well as the slow rhythms of the planet. 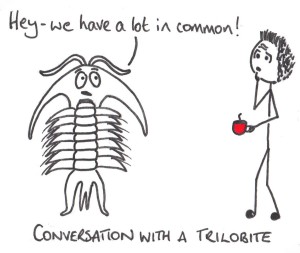 Homo sapiens, like the trilobite, is turning out to be a bit shit.

I imagine Earth will deal with a few more extinctions and make plenty of new life forms before the Sun runs out, so this is a short term issue, and not much of a problem for anyone except all of the planet’s inhabitants today.

I wonder, since homo sapiens v.1 is so quick and clever, whether we might be able to evolve ourselves over the next 50 years into homo sapiens v.2.0, a species with a future.  This would surely be better for all organisms than the alternative: of Earth re-affirming its creative destructiveness, cleaning out the closet, and building better models over the next few million years.

What would homo sapiens v.2.0 look like?  More awake perhaps, snapped out of their stupour of superiority, aware of the system they depend on so they can keep their fearsome power in check.  More sophisticated so that they can find ways to live that operate respectfully and within nature’s laws, rather than borrowing selfish me-time outside of them.

This evolution is an individual challenge as well as a collective one, and it is every person’s destiny to face it in their own lifetime, whether they want to or not; DNA can’t help here.  For me, a useful indicator of whether I might be on track for version 2.0 is whether I am still seeing and doing things in the same way as I always have done, in the way I was taught.  Because if I am, I am still generously contributing to the next juicy extinction, as ignorant as a trilobite, but vastly more responsible for what’s happening.