Recently my 6 year old daughter has wanted to talk through the options available to her when she dies.

On the menu she sees heaven (or hell), reincarnation, or going ‘back to the mud’.  She’s quite keen on the reincarnation idea, and at the moment she wants to be a butterfly (although she doesn’t like the bit about only living for a few weeks).

While talking to her, I found myself being especially careful not to influence her in any way, just help her think about it.  I made a conscious effort to hold back my own beliefs.  A good thing too, because, shining a fresh light on these beliefs, I found they were pretty unhelpful for any conversation.  For example: 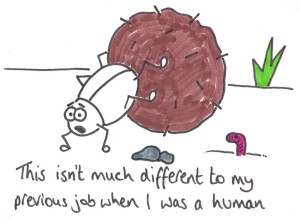 – Reincarnation: utterly ridiculous, obviously.  Rising again as a butterfly with human thoughts?  Caterpillars thinking about what they’ll have for tea?  <snort>

It struck me that my reasoning was little changed from when I first imprinted it in my head.  It was purely automated, having been formed long ago and not questioned since.  And I realised these beliefs are highly unsophisticated: blind to any symbolism, metaphorically retarded.  And I didn’t actually believe them; they were just words and actions I was mindlessly repeating and going along with.

My rationalising robo-brain can destroy my imagination and close off possibility.  Although it’s a good thing I didn’t state my “beliefs” out loud, it’s also a great shame that I had nothing better to share than a crackly old recording.  Being a healthy influence on a child is a wonderful thing, and who better than a father to tell stories and help conjure images that fuel a sense of wonderment?

Maybe I am a collection of borrowed molecules created a long time ago, which will go elsewhere once I give them up…the glass of London tap water I’m drinking has previously made up the brain and finger cells, and then peed out, by eight other people already apparently.  Perhaps some of my carbon molecules will one day travel up a tree and end up being used by a butterfly, or my toenails will help fuel a power station in a million years…it’s true enough for dinosaurs. 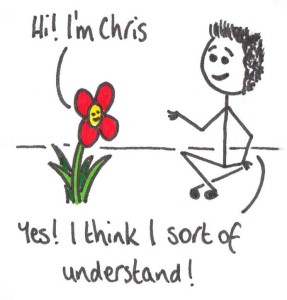 It’s not like I have cracked the meaning of the universe, but it is a big jump forward from a cynical and literal (not to mention egocentric) vision of myself trapped in a beetle’s body, craving a nice pizza.  At the very least, it feels like more inspiring material for a worthwhile spiritual discussion with my daughter.

The aim here is not to present a neat argument for reincarnation.  The interesting thing for me is that ideas and beliefs are fixed things, so beliefs I have adopted, often at the age of 6, remain unchanged if not consciously revisited and questioned.  This can add up to a rather misleading simulation of reality that I can be devotedly stuck to, which can damage not only me (even though I’m none the wiser) but also people close to me.  Beliefs need to die, and be reincarnated, in order for me to truly experience life and contribute to others doing the same.  And it seems to me that the first step is to actually stop and notice…then interesting transformations start to happen.

I’ll spare further Buddhist contemplation on this post.  But I don’t doubt I’ll spend some of this afternoon wondering where my breath ends and the air starts, or where exactly are the boundaries of a tree.  If I get stuck, I’ll ask my daughter.