I used to dream of riches.  Not in a particularly vulgar way – I probably thought of it in terms of “happiness” or “moving up” – but either way it effectively involved dreaming of and striving for some sort of future advancement.  It feels like I have let go of that dream (for the moment at least; hopefully it lasts) and have found that it is accompanied by a huge mental and physical release. 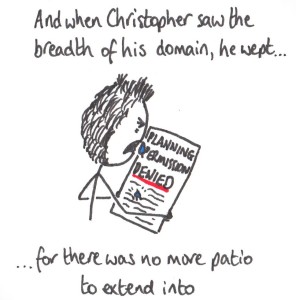 I remember a few years ago considering with my wife extending the house by digging into the basement.  Everyone already had a bedroom, and we had plenty of space, but it felt like a natural next step to increase our domain.  Basement conversions are startingly expensive, and we would have had to work for two years to pay for it…but we were going to work anyway (because one has to), and had to have something to show for it, so why not get a basement?  I could put a rowing machine in it, or a kids’ playroom filled with plastic toys and a big telly.

Having recently spent considerably more time in my house than before, one thing I have noticed is that I can only be in one room at any given time.  So who needs more?  And I don’t like rowing.

I think it must have been a compulsive thing.  I don’t know what comes first, the mistaken need to work like that or the mistaken need for a basement.  But in this case the third option (which, fortunately, we took) is to do neither; the work and basement cancel each other out perfectly, and effectively create 2 years of freedom instead.

Dreaming of riches, and relentlessly “moving forward” is, for me, one of the great prisons of our time.

The last 200 years have been great for the material advancement of the average Brit, who is unlikely to be starving or freezing to death in the streets (although I suspect there’s a staggering number of people who don’t feel they’re basking in the glow of 200 years of progress).  But in many cases, including mine, what seems to have been overlooked is the saturation point, where ‘enough’ has been reached.

I get the impression that this point comes pretty quickly.  Addressing basic necessity turns rapidly into feeding an addiction to more, a very different sort of necessity.  To me it seemed like a pretty normal habit, until I realised how badly it worked for me.  Not only did I progressively limit the option of living freely, but I created lots of nasty and invisible externalities in the process (and I still do…here’s a video someone has made of some of my recent contributions to the planet).

I am a very fortunate person.  A procession of favourable circumstances led to a perfectly average person getting a ‘London job’ and propelling himself (unknowingly) beyond the saturation point barely before he could blink.  But clearly it carries costs, to me and to others, if it continues for too long.

To stop dreaming of riches has been a very liberating experience over the past year.  I never realised how much stress and emptiness was involved in this approach, and how I could spend my days waiting and hoping for the future to happen, all at the expense of living today.