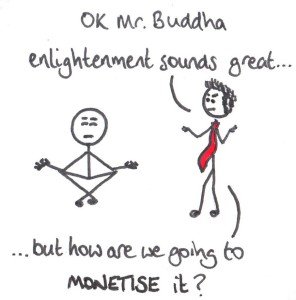 Business, it seems to me, has come to be worshipped as a medium for innovation and change, widely believed to provide the answer to most problems.

However, even though it seems to obscure most other things, Business (and its accompanying Jobs and Organisations) is only a part of the picture.  And to view the world only through its lens can frequently skim the surface, or totally miss the point, if it crowds out the shadow side of business – art.

How business can hinder

The religion of business – the dominant economic approach to the world – is the source of most of the comforts we enjoy but also one of the major causes of the problems that many businesses are now attempting to address. 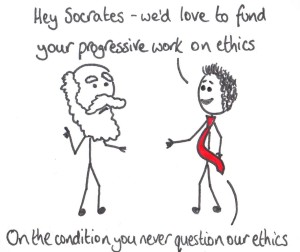 Business turns action into transaction: developing and selling marketable products, as quickly as possible, competitively, frequently at “arm’s length”, reliant on metrics, business plans, funding, scalability.  It is a consumerist expression of effecting change, so its power to meaningfully address the effects of consumerism might be limited.

Business is serious, and the creativity we need is more likely found in free play (which is dreadfully inefficient) and free expression (which is considered a risky business).  But speaking up against business orthodoxy can be taken for blasphemy – such is the nature of our economic dogma.

How jobs can hinder

The mixing of business with social aims has attracted many people out of purely profit-based pursuits, channelling their business skills and energy into something that might go beyond self-interest by helping worthy causes.  This is an encouraging development which is changing many people’s lives.  (Masseurs, teachers and priests, of course, have been doing it for centuries). 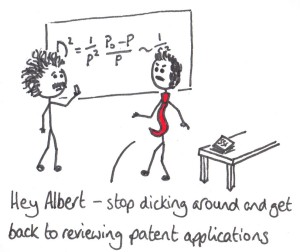 But it does have its drawbacks.  A job change does not automatically lead to personal change (especially if it is approached as a ‘nicer way to earn a salary’).  A job can be a vehicle for a person only to project themselves into a worthy pursuit rather than also looking inside and taking personal responsibility outside the office.

In some ways, anything that creates jobs and keeps people busy working is a threat.  Jobs are productive and crowd out personal time.  It is so easy to undervalue the slow, unscalable, unmeasurable impact that a person can have when they have time and space.

How organisations can hinder

Membership of an organisation requires adoption of the organisation’s values over personal values, in order to properly fit in.  This is frighteningly easy to do. 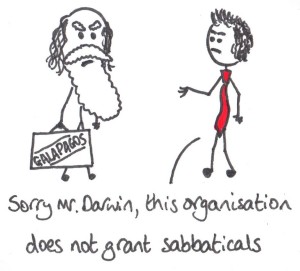 In more than small doses, it’s unhealthy to leave part of yourself at home every day; it eventually gets forgotten.

And when people gather together and subscribe to a common way of doing things, as well as stifling diversity it invites dogma…which ruins even the noblest of values.

Dogma can be avoided by questioning your approach rather than settling in and getting attached to it…but, in my experience at least, organisations don’t tend to be very good at that (it makes it very difficult to conduct business).

Hmmm.  There must be an alternative, right?

The answer for westerners to live in a sustainable way lies down a continued path of evolution, and it hasn’t been articulated yet.  And it can’t be articulated in the language and practice of the prevalent dogma of business. 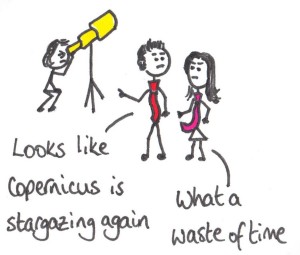 If the answer doesn’t lie in business alone, perhaps it lies in bringing more art back into the world; not painting, but exploration and creativity and innovation in their truest sense, for their own sake.  The change of heart that’s necessary to alter our trajectory needs more people to allow a bit of space to have a go at being artists: unpaid, unrestrained, undisciplined and without set direction, unhampered by the conflicts of business and obstacles of dogma (unremarkable is OK too).  Difficult to fit around business priorities, but necessary I think.  That’s the way we’ll discover answers we can’t imagine yet.

So, addressing problems through business is one of the better available ways to promote change. But at the same time it’s critical to avoid subscribing to a belief that it is the best possible way to make us human again, and a viable species.