I have not been recently released from prison, and I was born into one of the most safe and comfortable lives a human has probably ever lived.

Nevertheless, the concept of freedom became deeply emotive for me last year, as I began to learn the extent of my submissiveness and its dramatic implications…and how easily I could have remained unaware of it.

I called this my Freedom Blog some time ago, so I think it is time for a Freedom Manifesto, which gets a permanent page on my website.

This isn’t a sermon from me to anyone else.  I’m just bringing together my personal learnings after a transformative year, which will deeply influence my own actions from now, and how I choose to live. 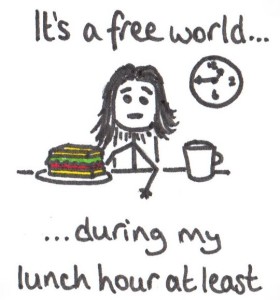 Freedom is a choice.  It is not something that is granted by other people; a lack of freedom cannot usually be blamed on someone else.  It’s about people being truly and consciously themselves, and all that goes with it.

And it’s easy for those lucky enough to live entrenched in the Western culture, not struggling daily to put food to mouth, to stop actively choosing freedom, and to perilously throw it away.