This month marks my first anniversary of giving up news.  No newspapers, no online news, no news on telly (no telly at all now other than DVDs).  I highly recommend it, if you are interested in the real world.  Here’s why… 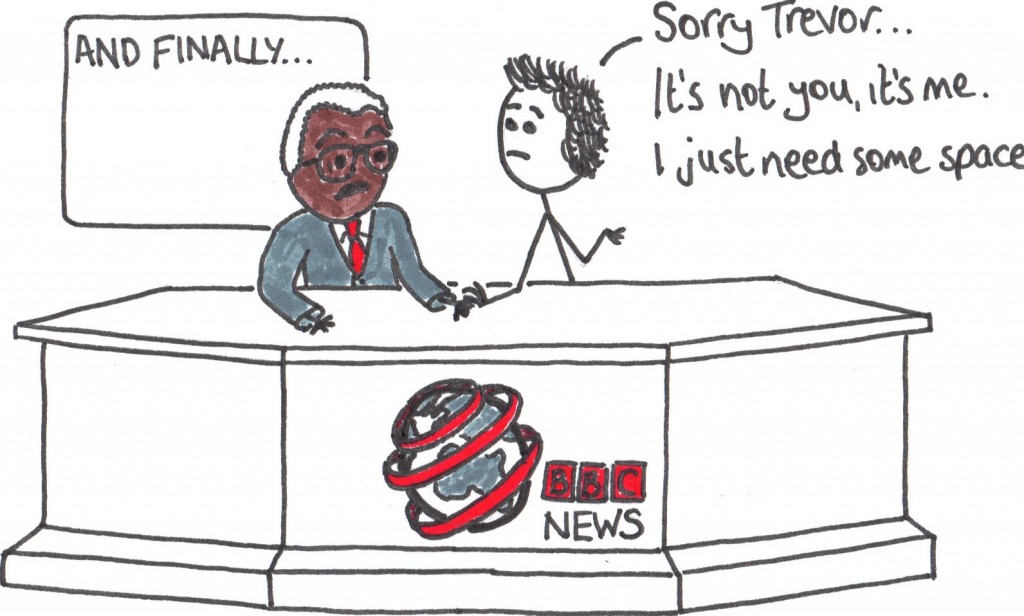 Why we do it

– The need to feel world-wise: we erroneously link reading about something to caring about it, ignoring the large chasm of meaningful action that lies between the two

– The need to have an opinion: somehow in my previous job there was a belief that if we didn’t read the Financial Times, we wouldn’t be much use to clients (in a current affairs clever contest at least).  Given the ubiquity of business news, this always felt like a race to nowhere

– The need to fill the silence: what else am I going to do on the tube…I can’t exactly sit there doing nothing but breathe for a while…can I?

– Conformity: it makes people feel comfortable to do and say and know the same thing as everyone else, but it’s a stretch to say there is any value in it

– It’s simply a habit: it’s what I like to do.  Sounds harmless enough.  There is a difference, though, between a habit and a true hobby.  If it’s just a habit, then consider the downsides…

– It’s utterly passive and nothing but a distraction: it’s unlikely I’m going to do anything about what I hear on the news other than frown. It’s just consumption, nothing else

– It’s second hand information: news promotes reliance on other people’s experience and interpretation, for a shallow, recycled opinion.  Since you are fed it, you don’t learn anything; real learning can only be self-directed

– Media debate is very low grade stuff: the way most things are reported makes it either misleading, or not worth knowing.  Watching a brief sketch of part of what’s happening in Syria is not constructive.  You might as well watch your head fill with squashed flies instead

– You can miss what’s going on under your nose: so much priority given to trying to simply know what is happening outside your sphere of influence, at the expense of trying to understand what is happening within in.  In this way, it makes it a very low-risk and self-indulgent activity

– It messes with your mind: distorts reality (if it’s all accepted as truth), feeds fear (child abduction is on the up! or at least the frequency of it being reported on the news), and nourishes ego (knowledge is power…or it was until we all started reading the same stuff)

– It makes you focus on daily events instead of long term patterns: leading to a dangerous loss of perspective

– It promotes the monoculture: I don’t see what’s healthy in all of us reading the same abstract, disconnected news, absorbing the same messages, reacting to the same signals, surrendering our own curiosity.  Goodbye diversity, hello fellow robot

What happened when I gave it up

– I gained a huge dollop of time which I could use more consciously, to discover more useful things.  For example, spending 20 minutes every morning attempting mindful meditation has been a great find (check out Headspace)

– I rediscovered books.  Books are a less instant form of gratification and promote much deeper reflection (see my 2012 book list).  Quality over quantity.  All the better for my “worldview” (which barely existed before)

– I found out stuff from other people: a more selective, deliberate and interactive approach

– I realised that I don’t really need to know anything real-time.  Just because something is available doesn’t mean it is worthwhile.  If it’s important, I’ll find out

– I took more of an interest in less urgent, more important issues closer to home, and actively researching them e.g. questioning the schooling system instead of taking it for granted, to come to my own view of its implications for my kids’ development

– Most importantly, I woke up: from an illusion that I was somehow separate from the news I had been reading.  The reality is that we all play a part in, and are accountable for, the seemingly abstract issues we see in the news

I really recommend anyone try to go for a media-free month and make their own discoveries.  Trevor McDonald will find a way to cope – he gave it up himself!