I have been thinking about how counter-productive it can be to be efficient.  Dangerous, in fact.

Yesterday morning I accidentally started brushing my teeth on the bottom row rather than starting on the top.  A glitch in the autopilot.  I was all over the place, a complete mess.  I noticed then that my morning regime is pretty fixed: teeth, hair, shave, moisturise (thanks Nat).  No real problem so far; little harm can be done at the bathroom sink (unless you’re one of those people who wet shaves).

Later in the morning I did some sprint training.  The four lampposts that I usually use for measuring my dash had been swallowed by the Moscow State Circus or something.  Bah.  Then I noticed there was the entire 99% of the rest of Clapham Common to use, and in fact I could use my own estimation rather than lampposts, and ignore my watch while I was at it, so I tried that.  It felt totally different; I felt slightly disorientated and sick at first actually, and had a strong urge to stop.  But afterwards it felt like a whole new exercise somehow.

Efficiency is highly valued in the industrial world.  Efficient people / machines do things right, and quickly.

But here’s a list of some instances, from micro to macro, where I see efficiency as a problem:

– I brush my teeth the same way each morning, so I miss the same bit each time.

– I exercise in the same way, fall into a pattern and lose all benefit, and start accumulating injuries.

– In school I learned the same standardised things as everyone else, and I emerged believing I was not creative.

– In work I perfected the processes I was required to master, and become a commodity in the eyes of my customer.  And bored stiff.

– I live the same lifestyle as everyone else, so we all consume the same efficiently-produced mass market products and exhaust the identical finite resources.

Efficiency would appear to be the enemy of diversity.  It is highly valued, because we have turned 99% of the world into an industrial monoculture, but it is ultimately no good for anyone, anywhere along the scale.

In the absence of diversity, every system will eventually fail.  I find this truth increasingly impossible to ignore.  As individuals, I believe we hold ourselves back and hugely limit our potential.  Collectively, we are having a lethal effect.

Instead of efficiency (doing things right), how about effectiveness (doing the right thing)?  I fancy drawing a graph to illustrate this point, using my career (or whatever it is now) as an example: 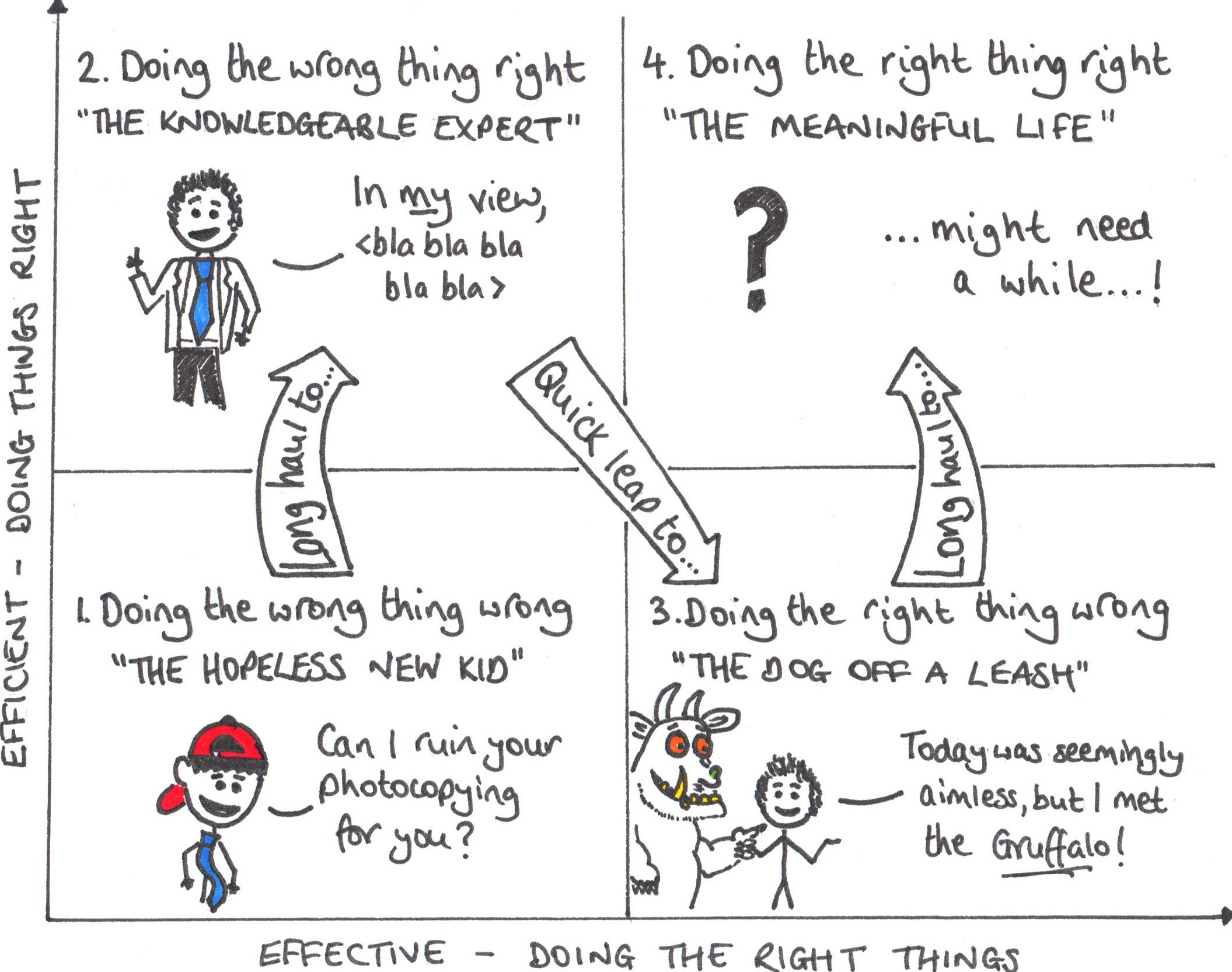 I try more to plump for effectiveness these days.  I’m still rubbish at it, but the general direction feels right.

Tiny new steps and experiments are probably the way to introduce effectiveness.  So I am definitely walking to the tube a different way today.  Who knows what I’ll discover…maybe I’ll make friends with the Gruffalo or something.