Culture, whether it’s a family, office, national or global culture, is generally regarded as a positive, healthy thing.  But maybe it’s a monster in disguise that takes a grip and massively dumbs everything down. 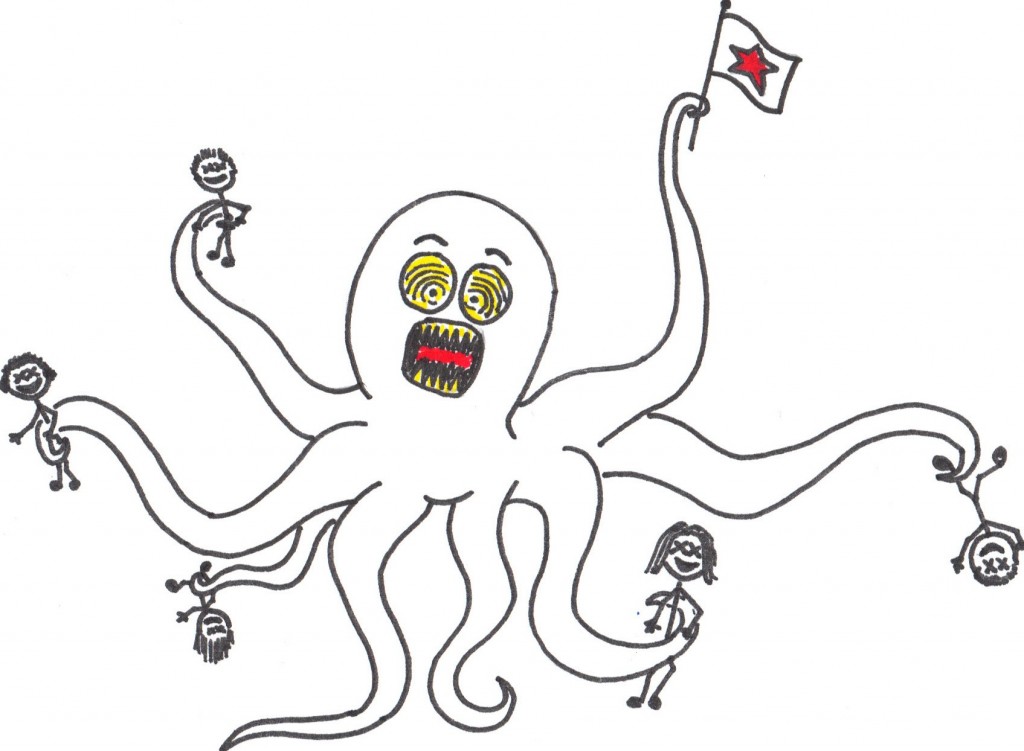 A culture is a shared belief system, which provides useful practices for coping with life.  It creates a consensus within which people can comfortably function, defining what is normal and appropriate.  It promises wellbeing if the culture is observed.

A culture will therefore naturally seek to protect the status quo, encouraging people not to question things.  It provides (replaces?) a sense of identity.  A culture seeks to standardise and automate.  It makes things easier; we barely have to think about what we do or say, we just habitually do what is normal.  We predictably obey, and silence our inner voice.

Culture doesn’t seem so nice to be after all.  It feels more like a tool of coercion.

A soft form of coercion, though.  Most of the time it is never deliberately put in place, it just forms.  There isn’t usually some nasty person enforcing it – all members of the consensus are involved in mutual coercion simply by enforcing the norms of the culture on each other on a daily basis.

The problem is that it’s impossible for a group of individuals to fully share the same consensus.  Reality is just too diverse.  So a culture must inevitably require suppression of individual potential into something more convenient, its followers acting automatically (obediently), driven by outside influences rather than consciously, driven by their true nature.

Culture is effectively a cult, making us less authentic and thoughtful through striving to be a good fit.

Being aware of this – less entranced – must be a very useful thing, so that more conscious decisions can be made, balancing autonomous action with fitting in, to get the best possible result, rather than just a safe and appropriate result.

I do begin to see an alternative, though.

Rather than being led by Culture, an alternative is to follow Purpose.

For this route, what you are doing and how you are doing it is not what’s important (and is your choice).  What’s important is fulfilling a shared greater purpose.  This releases people to bring their true selves, skills, ideas, to a situation; to meaningfully contribute and realise the full potential of themselves, and others.

That won’t sit well in a hierarchy.  So it wasn’t seen very often in my old industrial circles, but it can already be seen elsewhere.  It’s just not that easy to bring about…it’s counter-cultural.