It has only recently occurred to me that it is possible to go through life without ever becoming a mature adult. 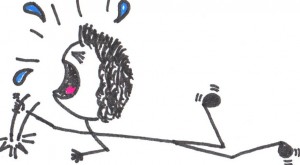 Throughout my adulthood I have seen childish behaviour in me and all around me: the dominating boss, cowering employee, gossiping friend, impatient father, paranoid workaholic, jealous neighbour, vain poser, aimless wanderer, angry campaigner, promiscuous batchelor, swaggering achiever.  Or the one who just goes apeshit.

These are extremely familiar roles.  Perhaps it is because our culture actively encourages all this.  Patriarchy is very much alive and kicking, portrayed as the essence of masculinity, while thoughtfulness and gentleness tend to be a bit girly.

So, like a child, an immature adult mistakes threatening, hostile behaviour for strength, and either emulates it or succumbs to it.

It seems to me that central to the transition from boyhood to manhood is the full acceptance of responsibility, and the ability to be centred, calm, compassionate and mindful, with great positive energy and clarity of vision.  Like the way tribesmen tend to come across.

In most ancient cultures I can think of there are sacred rites of passage.  These often involve isolation, pain, and deep introversion…and also careful spiritual guidance by elders.  The boy emerges as a man with a purpose (some call it a totem, or medicine), self-knowledge and confidence gained from a deeply formative experience.

In my culture, we just turn 21, knock off an arbitrary milestone and move on, no wiser and just as incomplete as when we were 16.  Graduation often just involves wearing a stupid hat.  And after that, we can easily be too busy going to (or looking for) work to think of anything else.

Interestingly, the “real men” that I know, those who have fundamentally transcended childish immaturity, have all had rites of passage in their own way; usually unexpected and unwanted.  They got through the tough experience and emerged as men.  Good for them.  The first clue to spotting people like this is to look out for who is not complaining.

For me, and anyone else who might have spent life jumping through hoops, I don’t believe it’s ever too late to grow up.

Perhaps what I’ve always needed is a rite of passage of my own, and perhaps 2012 is my year.

P.S. I don’t see why exactly the same wouldn’t be true for girls becoming women, just with less hair.