This post is about how I learned how collaboration and introversion can mix, and how this ended up in my first rap video (showcased at the end). 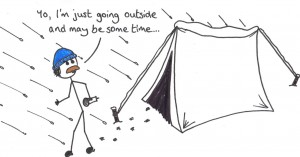 It is only this year that I have properly understood what collaboration is about.  I put this down to always having been in a hierarchy.  Collaboration doesn’t work in hierarchies.  You have teamwork there instead, which is very different: it’s a groupthinky thing where people try, as cheerfully as possible, to do together what they’ve been told.

It is also this year that I properly realised that I am an introvert.  I don’t mean that I am shy, but when it comes to going into Make mode, I have to be alone.  It probably explains why I hated teamwork so much.  An introverted approach is very unsportsman-like in the corporate teamwork culture.  I used to try my best to be absent for committee-type work or discussions, ensure my project teams and meeting delegations consisted of one person, and generally used to sneak and slink around in order to get my necessary time alone.

But an experience one weekend in July suggested to me than collaboration is tangible and powerful, and that perhaps introversion is an essential ingredient.

Let me quickly set the scene:

1. Good For Nothing: a highly progressive enterprise that brings together a community of “thinkers, doers, makers and tinkerers” and aims them at “accelerating the work of cause led innovators and change makers”.  This is often done through the medium of an intense weekend where 50-100 people are chucked together, left to self-organise and create output by Sunday afternoon, with few rules other than No Hierarchy.

2. David Bond and his filmmaking partners Green Lions, who are on a quest to reconnect children with nature – The Nature Project – and are producing a feature-length documentary while they do it.

3. The weekend event: Wild Thing, where the Good For Nothing community joined David Bond’s cause.

This is what I learned:

1. THE GROUP HAS THE BEST IDEAS, NOT THE INTROVERT.  Introverts shunning collaboration will surely be less inspired and miles less innovative, restricted by a narrower range of thought.  I found I needed the help of other people to distil my tangle of big picture issues and ideas down to something simple and actionable, in this case a childishly basic concept of “Wild Dads”, nothing more than encouraging dads to actually take their kids outdoors.

2. THERE MUST BE AN ESCAPE ROUTE.  Introvert or not, most people want everyone else to bugger off at some point, right?  There is a time for privacy.  In open work spaces, the air is thick with interruption and distraction.  A lack of private space in teamworky places, accompanied with a cynical distrust of anyone who does not have their bum on their seat can never create much.  At the Wild Thing weekend, I needed to disappear from human beings for most of the second day in order for rich ideas for execution to come to me, and for the concept to become a creation.  And it came out as a manifesto.  In the form of a rap song.  Animated by a thread of cartoons.  A rapifestoon!!

3. THE INTROVERT MUST RETURN TO THE COLLABORATIVE FOLD. The final product will never be as good as it could be if I only do it myself.  Once I took my ‘thing’ back to Wild Thing, I witnessed how collaboration works at the back end of the process.  The cartoons (which took 90% of my time) were ditched.  That’s fine – that’s how it works.  The film crew instead saw a video opportunity.  They directed, I followed, and they took it away and 2 hours later showed me and everyone else what they / we / I had produced.

Magic.  I am now a fully fledged Introvert Collaborator, and here’s my first rap video as a result (if the Vimeo thumbnail doesn’t appear below then click here):