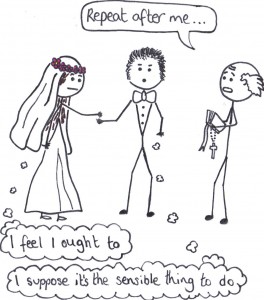 I have been asking ‘Why’ a lot recently.

The other week it was directed at Retirement.  Today it appears to be Marriage.

Some traditions, like Christmas, are loads of fun (although I expect to face a moral dilemma about lying outright to my kids about Santa). Others, like sexism, are poisonous cultural hangovers that still need to be eradicated.  Others are somewhere in the grey area and need a Why thrown at them.

If you strip away the celebrity and excitement surrounding the whole marriage thing, would you honestly say you love someone more the day after marriage than you did the day before?  Is the fact that you are married going to make you more likely to love each other in 5 years?

I would hope not.  Marriage is man made.  Love is a force of nature.

Unless you are the type that needs to be locked in a room in order to work, or chained to a rowing machine in order to exercise, I don’t see any primary link between marriage and a healthy relationship.  To me, marriage is just circumstance.  What makes the difference is what you are doing.

In fact, marriage might actually take the emphasis away from what’s important.  There is the danger that the formality and expectations that surround marriage can shift a relationship’s focus away from freedom and towards obligation.

I can’t sleep with you because:

A. I’m married (otherwise I would)

(or C. You find me deeply unattractive)

Answer A is dutiful but does not reflect well on my relationship, B does…the marriage bit is irrelevant (and I came to terms with C at a young age).

There are lots of reasons to get married (emotional, religious, legal), but is it healthy for God or State to muscle in between two people?  There’s plenty of room for those things it you want them, but it’s a shame for them to become the focal point, or to do anything just because “it’s the done thing”.

So if getting married genuinely strengthens a couple’s relationship, then for me it sits next to Christmas.  But if it interferes with a relationship’s authenticity, perhaps it’s an invention that many couples would be wise to divorce themselves from.