When will I ever learn? 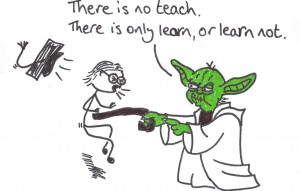 Apparently the equivalent of the English word “teach” does not exist in Sanskrit or any of the 21 other official languages in India.

It appears that the at the root of this is a belief that when someone actually learns something, it’s because they have learned it themselves, not had it installed by someone else.

When someone has assigned you a task, have you ever responded by chugging out some output for them (rather than, ideally, internalising the concept involved)?  If you are a person who does not do this type of chugging all the time then I really want to meet you, I have a lot to learn from you (although I’m not saying that you could teach me anything).

Teaching (or managing) is egocentric and breeds parrots, at any age.  Learning, which involves the freedom to roam and discover under the guidance of leadership, means The Force is being tapped into.

It’s a great advantage to infants that they can’t understand a word we say, as it means we don’t feel we can do much to intervene and teach them how to walk.  Instead, they work it out for themselves – the most complicated and challenging thing they’ll ever have to learn.