Where the grass grows greener

I always used to feel a bit crushed when people used the “grass is always greener on the other side” argument on me whenever I was getting idealistic.  At the time, the argument carried weight for me because it was rational, generally accepted wisdom, which is always hard to argue against.  But it is a pessimistic concept that is cemented in the idea of status quo, our society’s default mechanism.

The argument doesn’t work on me any more.  If combined with meaningful change – and the hard work (and mystery and excitement) that this involves – the grass WILL be greener, no question. 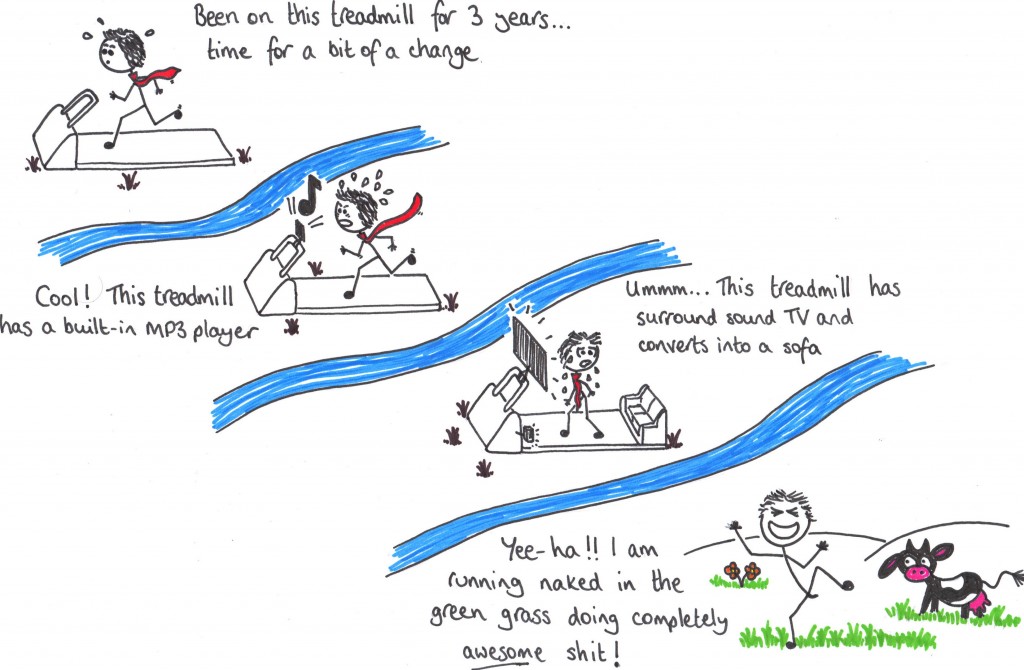 Limiting change to simply tinkering with which piece of grass is being stood on is indeed pointless.  Entirely the same person is still looking to fill a gap in his life by doing pretty much the same thing, and a new patch of grass on its own won’t of course help.  For example:

– Changing job without changing the way you work (the boss is a bit nicer, but I still find my career unfulfilling)

– Changing relationship without changing the way you behave (she’s prettier, but I’m still an angry person)

But when the change goes deeper and touches something that feels meaningful and fulfilling, the grass can truly be lush.  For example:

– I have changed my job to doing something that I care deeply about and am not locked in a crazy hierarchy.  It feels awesome

– In my new relationship I am trying to express myself more honestly and be more compassionate.  It feels awesome

– Our family is involved with the local village community and loves playing in the woods rather than the roads.  It feels awesome

The challenge I am issuing to myself for any decisions from now on: am I just upgrading myself to a novel treadmill, or am I going to run naked in the green grass doing completely awesome shit?