It’s not a coincidence, it’s a connectaroo 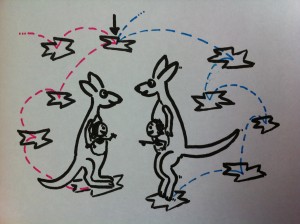 I am such a newcomer to the digital universe that my sheer naiveté might stagger you.  An example of this is my wonderment at the greatly increased number of coincidences that have started happening.  If that’s what they really are…

Here’s the dictionary definition as a reminder:

Coincidence = remarkable concurrence of events with no apparent causal connection.

The thing is, delightful moments of concurrence are happening to me so much more frequently that I don’t believe they are coincidental any more: it’s remarkable how much they happen, but not necessarrily that they happen. It seems it’s just the way this universe works.

Here’s an instance from recently; stick with me.  Someone emailed me a link to a blog post, that talked of a book, that I bought and read, which gave me an idea. I shared this idea with a friend, who said Wow, she had had a similar idea, having seen an old TED talk, which she passed to me, and I watched, and noticed that it sourced the same book I had just read.  Is that a coincidence?  There are lots of books and blogs and TED talks out there, and lots of ideas to have, so you might think so.

But actually I think it’s not.  It seems to me like it’s a direct result of lots of inquisitive people finding ideas, connecting with others and sharing.

I think I need a new word for the event that is not a true coincidence.  How about a “connectaroo”: a series of connected ’hops’ that leads to a wonderful concurrence.  Next time you think you’ve seen a coincidence, stop and look for the links.  You might find it’s actually a connectaroo.

The capacity of people to share, connect and create invigorating concurrences is truly remarkable, and testament to people’s generosity and creativity.  I do love a good connectaroo.

P.S. If anyone has a better idea of how to doodle a connectaroo then do let me know. Unless you have something actually constructive to do.