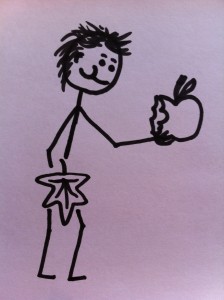 Have you ever suggested an idea, but found that the first thing that happens is a discussion whether it has been done before, rather than whether it could be a brilliant thing for you to do?  I can’t help thinking that the frantic quest for originality misses the point entirely.

Apples are delicious.  That billions of people have eaten apples too makes them no less delicious.  I shouldn’t feel compelled to breed a guavanana or a lemonicot so that I can eat fruit. True, there is nothing original about eating an apple…but what about THIS apple?  Where were you eating it and how did it make you feel?  Now the apple gets interesting…

One thing that I have come to appreciate writing this blog is that trying to have a different experience to other people and crowing about it online is a real turn-off.  But realising that I’m going through the same thing as many others, and just sharing my interpretation of my own version, can sometimes be quite engaging.

I am learning that originality does not have to relate to a totally new idea (e.g. a caveman might have come up with a version of Freecycle, although probably offline).  It’s less about what the underlying idea is, but why I am doing it and how I personally am choosing to go about it, that brings the originality.

Unoriginality occurs if you simply seek to repeat someone else’s interpretation of an idea.  Even worse than that would be to not pursue something that fires you up because it’s not considered original (treating a mythical, MBA-friendly “gap in the market” as more important than your inner drive).

But what do I know?  It’s just what I think.  In fact, these thoughts aren’t even original, as they were undoubtedly inspired by other people, including recently by an author called John Carse.  They probably weren’t originally John Carse’s ideas either.  But it really doesn’t matter – he decided to write a book and make an idea his own masterpiece, and I’m going to do my thing.