Cleanin’ out my closet 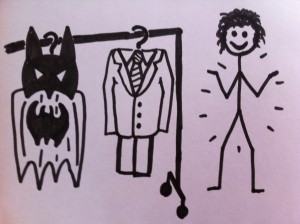 What effect does it have on you when you put on your work clothes (whether accountant, football player or hoodie), and who exactly goes to work that day?  Last night I was liberating some prime space in my wardrobe by putting my suits away, and it got me thinking…

Suits signal consistent and orderly affairs, and being in control.  In the jobs I have had, suits helped me act out the role I needed to play, particularly to be more believable to others, preferably infallible (the image financial advisers often feel they must project).  But what shortcomings was I trying to cover up?  Maybe I was a sheep in wolves’ clothing.

Outfits can also do the opposite: wearing my santa suit at my son’s nursery and my sparkly disco jacket at my daughter’s school disco helped me take myself LESS seriously, but it’s the same issue – I needed an outfit.

At my last job the best deals got done when people eventually decided to “loosen their ties, roll up their sleeves and agree something”.  Dropping the act can really help get things done.

Things are changing in this direction.  The Internet is partly behind a cultural shift, with its power to unveil.  I found last year that certain people preferred me not to wear a suit; they suggested it made me come across as too stiff, or as if I was more important than them.  (The dark side of this is casual dressing as a ruse.  Have you met the sneaky guy who dresses down to try and catch you out?  He’s similar to the one that “acts stupid”.)

So my concern with outfits is that they tempt you to play a role rather than be yourself.  Fine for parties, less good for the rest of your life.  The merging of me and my outfit, making it part of me rather than covering me, is hopefully part of my journey.

So out go the suits.  I’m gladder than ever that I shopped at M&S and not Armani.