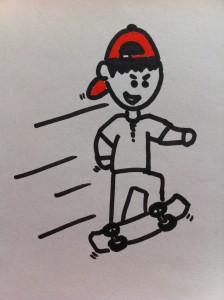 What can adults learn from young people?  And can the old dogs be open enough embrace these new tricks?

Now that I have flown the nest of my career, I am once again working out what to do when I grow up.  I find myself experimenting with different ideas, some revolving around an attempt to run as fast as I did when I was 17.

I lack many things I now view as useful for the future: skills to learn such as ANYTHING digitally-oriented (that are second nature to children), and characteristics to rediscover such as bold adventurousness (that we’re born with and then often seem to lose over time).

I went to a hippy American website that I like, Marc and Angel Hack Life to see what they have to say.  Here’s how they see it: 20 Practical Life Lessons Kids Can Teach Us.

True, adults can often have an overly romantic view of being a teenager.  And some of the less sentimental bits of my youth – which featured, amongst other things, a really bad hairdo and a tendency to make an arse of myself – I would perhaps try not to re-enact.  But even these are valuable, at least in the sense of not being too serious, and being able to fall over a lot and get up again.  One useful advantage over last time: not having the handicap of wasting half of every day thinking frustratedly about girls (and the other half asleep).

There is clearly a lot that adults can learn from young people.  Of concern is whether adults have any fresh new thinking to impart to teenagers, instead of the traditional, conventional stuff that the youngsters are going to grow up and try to change anyway.

To that end, it strikes me that a particularly progressive thing to do could be to regress, and capture the best bits of being a teenager again.