Unqualified, and of no use 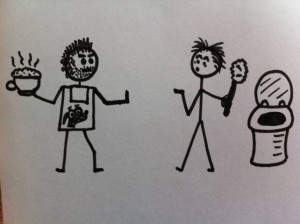 I can report that I failed in an attempt to help someone yesterday.

I was sat in a local coffee shop that has good green tea and good wifi, and I overheard the boss talking to his assistant.  He said to her that he wouldn’t be able to take a day off this month because lots of staff are away, and he hasn’t plucked up the courage to tell his girlfriend yet.

So I went up to him and briefly explained what I was doing, and when he didn’t flinch too much, I offered to volunteer for a day so that he could do something nice with his girl.  My services could include clearing up, washing up, cleaning the loo, smiling at customers and perhaps using common sense wherever possible.  I had in mind that in return he could maybe “pay it forward” – do something for someone else that he wouldn’t otherwise have done, or maybe his shop could support a local activity that I had been quietly dreaming up in the corner of his shop.

He asked me if I was able to do coffee.  I said no, I can’t even drink coffee.  He replied (in the nicest way) that if I can’t do coffee then he can’t take a day off, and anyway he has several people to help him with the dishes.

So I switched to ordering a sausage roll, which left us both happy.

What certainly was interesting was that I was nervous to go up to a semi-stranger to ask him if I could help, so clearly I need to be doing it more until it feels natural.

And if you’re ever anywhere near the Black Lab cafe near Clapham Common tube, go in and get a sausage roll – they are delicious.

3 comments on “Unqualified, and of no use”