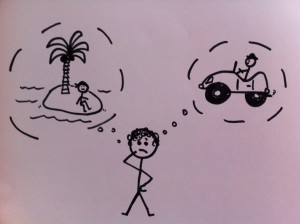 What is stopping you from doing what you’d love to do?  I have noticed that people can often deny that they have the power to change things, by convincing themselves that it’s out of their control, beyond their reach.

Unless you are one of the very unfortunate ones in society, the situation you are in (or not in) is most probably a product of choices you have made (or not made), whether deliberately or passively.

In recent weeks I have quite often been told that I am in a privileged position that permits me the indulgence of quitting my job to pursue an ill-defined dream.  “You’re very lucky you can do that”.  But something about that doesn’t feel right.

Recently I was talking to a guy I once worked with.  He said what he’d most love would be to leave his job, but he couldn’t.  His massive house and his kids’ school fees were too expensive, as was his love of fine wine and fine art.

He described how his house was worth £4m, and it had occurred to him that he could sell it, buy a £2m house and have lower expenses, plus £2m cash.  What stopped him doing it was that his big house was too full of stuff he’d bought that he wouldn’t have room for otherwise.  And he liked big houses.  He really had no option but to keep plugging away.

It seems to me that money can facilitate or limit a person, and it depends on lifestyle as much as income.  For my decision, money was a practical consideration, but the real determinant was simply allowing myself to have an adventure.

No situation can be treated as an obstruction to something more desirable if it reflects a conflicting choice made elsewhere.  For most people it comes down to priorities, not circumstance.

Or whether they are willing to make the choice at all.